Like manna from heaven, food from above rains on the deep. Those productive shallow waters full of light, photosynthesis, and food are an extreme contrast to their dark abyssal brethren. With such commodities as nourishment afforded by light absent, any carbon falling to the deep is vital. And more importantly, carbon is never wasted.

A tragic event has befallen a rattail fish at 1,100 meters. The fish is alive, barely, and visibly quivering. Not able to swim any longer it falls to seafloor, continuing to tremble, and slowly dies for another hour.

When the fish first arrives to the seafloor, whelks are rare. However the chemical cue of the dying fish soon lures the snails from afar. During the first hour only two were present. Within four hours, moving slowly (a meter an hour) as they creep along the muddy seafloor, 78 whelks swarm the fish. The whelks are here to speed up the fish’s death. The hungry scavenging snails, cannot wait for pleasantries, like a fish dying before they consume it. There is no predicting when the next food fall will arrive to their part of the seafloor. 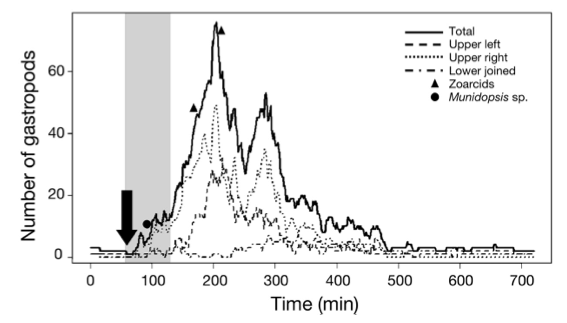 Within eight hours, the fish transitions from dying to dead, not taken by the original calamity but by a pack of flesh hungry snails. In the abyss, a dwindling life begets continued life even if the path is not attractive.