This is a guest post from Dr. Kristen Marhaver. Kristen is a Postdoctoral Scholar at the University of California at Merced, who lives full-time and studies coral reefs on the Caribbean island of Curaçao. She is an occasional blogger, frequent photographer, and a 2012 TEDGlobal Fellow. After seeing her grim photos of the Curaçao oil spill on Facebook, I asked her if she would write about it for Deep Sea News.

In the face of a brutal insult, one often turns to wry humor as a coping mechanism. I found myself doing this last weekend as I walked along a wetland on the Caribbean island of Curaçao, offended by the landscape around me:

“Now these birds are tarred. And feathered.”

“You can fry crab legs in butter. Or oil.”

“Here comes the creature from the black lagoon!”

And when I happened upon a pair of abandoned flip-flops, one suffering from catastrophic damage, it was all too easy to joke about blowout preventers.

I was walking along the bank of a shallow bay in the neighborhood of Sint Willibrordus, not far from where stayed when I was a Ph.D. student studying corals. Sitting just inshore from the beautiful corals of Rif Sint-Marie, this saliña is home to a large population of flamingos and lined with beautiful mangrove trees. It was now also ringed with tar balls, oil slicks, and strands of crude, lapping at the shore with each wave.

Just up-current from this blackened bay is the Bullenbaai Oil Terminal, where oil is transferred between large trans-oceanic tankers and smaller ships that can navigate the shallow ports of Venezuela and the Gulf of Mexico. At this facility—which is owned by Curacao’s Isla Refinery—oil had been spilled from a storage tank on land straight into the blue Caribbean waters below. Thanks to tropical storm Isaac, the normally-offshore winds had reversed direction, delivering this crude insult onshore and into the saliña. 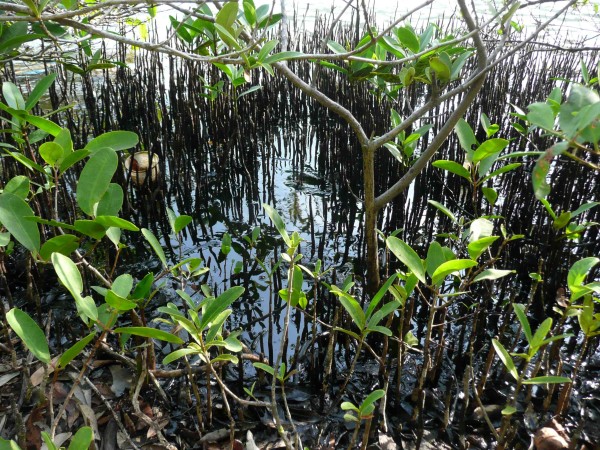 An oil spill in the news is an abstract thing. Though I had seen photos from the Exxon Valdez spill and video from the Deepwater Horizon blowout, I hadn’t prepared to be so deeply insulted by an oil spill in person. Crude oil is the blackest black there is. In a shallow bay in the hot Caribbean sun, it had formed greasy pavements and tar balls almost impossibly goey. It shellacked anything it touched – animal, mineral, or vegetable. I watched a painted-black crab stumble across the ground. Tar balls bobbed between paved-black rocks and the dense underwater branches of mangrove trees, where juvenile fish usually hide from predators. The mangroves’ thin root-like breathing structures poked up above the water surface, slimed with crude and certainly clogged. The arboreal version of black lung. A flock of five flamingos took flight, with black patches on wings where they didn’t belong. 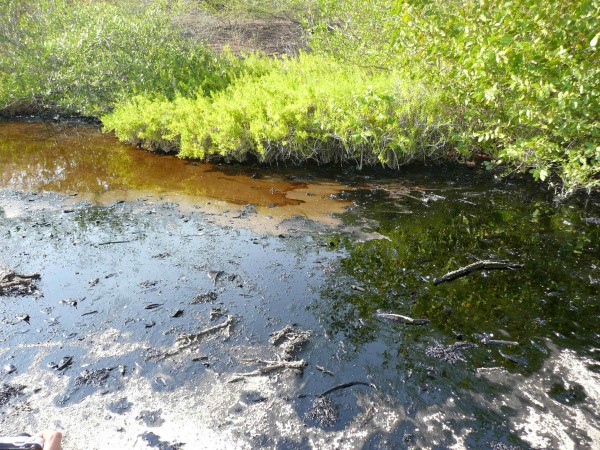 To add injury to crude insult, whatever fraction of hydrocarbons that hadn’t found its fate in the form of tar balls or tree-suffocation-slurry was evaporating from the saliña, delivering a headache and nausea on top of my tropical depression. When these chemicals are mixed by waves into the nearby coral reef, the most sensitive corals will die. Others will grow more slowly for years. 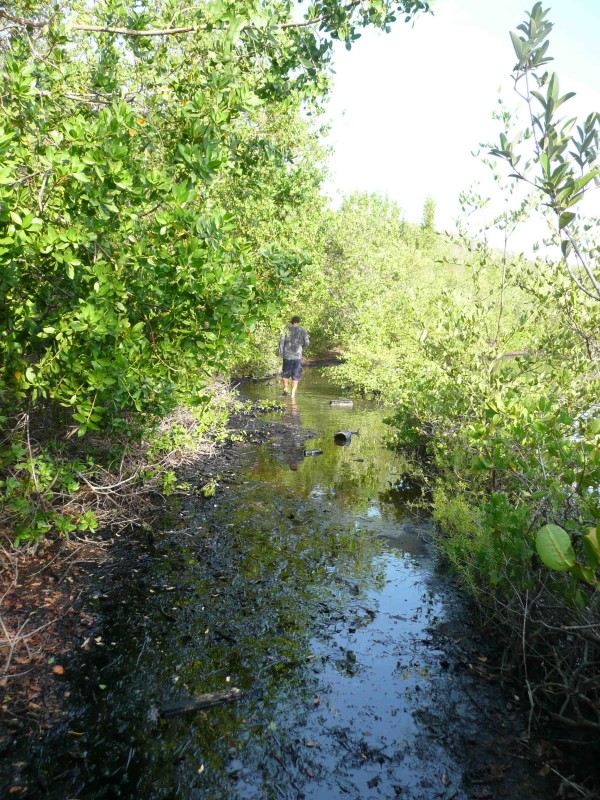 As the animals starve and suffocate, as the mangrove trees wither, Curaçao as an island suffers as well, losing million of dollars in natural resource value. When healthy, the saliña at Rif Sint-Marie is a nursery for juvenile fish, a foraging site for flamingos, habitat for shore birds, a sanctuary for native plants, a tourist attraction, a recreational area, a natural treasure. Yet the total fine for spilling oil in Curaçao, if it comes from land, is 5,000 Netherlands Antilles guilders or about $2,800 U.S. dollars. The amount of oil spilled doesn’t change the fine.

Just days before the spill, the Curaçaoan government proposed that the saliña at Rif Sint-Marie along with three other sites be protected through the Ramsar Convention – an international treaty to identify and conserve wetlands of international importance. Central to the Ramsar agreement is the commitment to “wise use” of wetlands and the preservation of their ecological character.

I could scoff at this as a sad irony, symbolic of the balance of powers when humans and nature wrestle for survival. But I’m less of a pessimist with the crude jokes out of my system. The people of Curaçao responded to this oil spill with cutting questions, focused attention, and hundreds of hours of volunteer work. Together with the Ramsar proposal, it’s a sign that the island as a whole is waking up to the true nature of the treasure it owns. It’s not black gold, the giant refinery in the middle of the island, or a terminal to transfer petroleum from one tanker to another. It’s the coral reefs, the mangroves, the birds, the undeveloped lands, and the millions of dollars they’re worth when kept safe from our insults.

12 Replies to “Guest Post: Crude oil insults in the Caribbean”