In a remarkable turnaround, Craig directed me to a very cool new study about manta rays (next thing you know I’ll be sending HIM papers about energy availability in the deep sea…).  In it, the authors use the birth of a baby Manta alfredi in the Chaurami Aquarium in Japan to study  these largest and most charismatic rays, and the results provide evidence of a new and interesting mode of breathing in embryos, not previously known in the animal kingdom.

In humans and other placental mammals, the embryo is attached to the wall of the placenta by the umbilical cord.  When we are (as Stewie says) “incarcerated in that uterine gulag” for 9 months, we get all the food we need and, importantly, all the oxygen too, from that twisty lifeline to the placenta.  Elasmobranchs (sharks and rays) are a different kettle of fish (wa wah!); various members of the group display a diverse range of reproductive modes that, in my opinion, are probably one of their evolutionary keys to success.  Some sharks lay eggs (oviparous), while some give birth to live offspring (viviparous) and yet others have eggs that hatch in the uterus (ovoviviparous).

Mantas are in that group that gives birth to live offspring, but unlike most viviparous sharks and rays, its one baby at a time and what a baby!  Myliobatids, which also includes  devil rays,  eagle rays, cownosed rays and their relatives, give birth to VERY well developed babies that are essentially immature adults.  In every way they resemble full grown animals and they often have wingspans at birth that are a sizeable proportion of their parents [The first time I saw a cownosed ray giving birth I briefly – and embarrassingly – thought the baby was a male mounting the female!]. The babies come out rolled up like little chondricthyan burritos, it’s really very cool.  But I digress…

The folks at Chaurami Aquarium in Okinawa Japan have manta rays and were fortunate enough to have a pregnancy and birth that they could study, which is something that would be effectively impossible in a field population.  Tomita et al. used this rare opportunity to ask a very simple but important question.  Mantas give birth to live offspring but have neither placenta nor umbilical cord, so how does that giant embryo survive and grow in the uterus?  How can you have a live baby without a belly button, hmm? 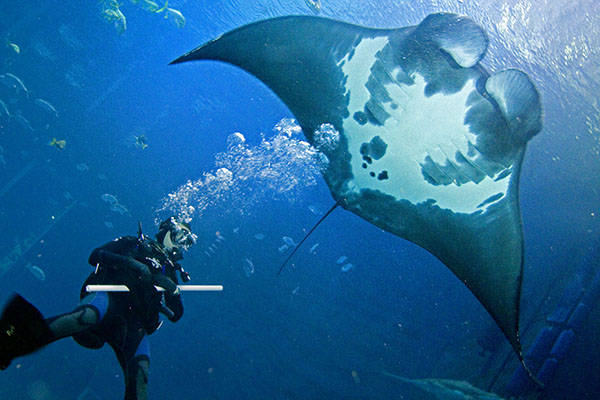 The answer appears to involve a little bit of work on the part of both the mother and the offspring.   Mum does a clever bit of multitasking by combining the functions of amniotic fluid and (an analogue of) milk into the same liquid, a lipid rich bath in which the embryo develops, constantly drinking the fluid to provide sustenance for growth, while the mother produces more to replace it from the uterine wall.  This was already somewhat understood.  What Tomita et al. showed using ultrasound and CT scans was that the baby manta helps itself by breathing the manta milk too, actively pumping the liquid in through the mouth and spiracles and out through the gills.  This is extra interesting because once they are born, mantas rely mostly on ram ventilation of their gills from forward swimming motion in order to breathe, so they undertake a pretty major shift in breathing mode at parturition.  It also suggests that the bottom dwelling ancestors of mantas did them a big favour in this respect.  Most of those species retain the ability to breathe by buccal pumping into adulthood and they rely on it as their major mode of respiration (and usually feeding too).  In evolutionary parlance, then, mantas were pre-adapted for this type of embryonic development.  The authors relate it more to buccal breathing of embryos inside eggs of oviparous species, but I suspect a common ancestry with live-bearing, bottom-dwelling rays has more to do with it.

Both the lipid histotroph feeding and amniotic buccal pump breathing of manta rays are quite unique and show a completely different way that an animal can grow a large and well-developed embryo, a method that bears little resemblance to the method employed by the paragons of the big baby: mammals.  It’s a very elegant system and I have to pause and marvel at yet another major discovery from a poorly-known marine megafaunal species.  I wonder what other physiological and developmental wonders are out there among the pelagic zone, just waiting for us to tackle the logsitic hurdles of working with these amazing sorts of species?

3 Replies to “Ever seen a manta ray’s bellybutton?”