We’re excited for another guest post from Kim Martini here at DSN (read previous posts here).  Kim is a physical oceanographer working at the University of Alaska, Fairbanks.  She is part of a science team in the Arctic for a two-week cruise to study the currents in the Chukchi Sea. You can find her on Twitter at @rejectedbanana.  Make sure to comment below and welcome her to DSN.

Five days into the cruise and we have now chucked a veritable zoo of instruments into the ocean to study the currents in the Chukchi Sea.  While it may seem crazy to throw so much stuff overboard, each instrument allows us to see the ocean in a different way. Combining the data from these various instruments we hope to not only understand where water is carried northward into the Arctic Ocean by these currents, but also how the currents themselves evolve over time.  In this post I’ll be introducing a couple of species in our instrument zoo and talk about some of the behaviors of the currents we are studying. Currents in the Chukchi Sea! courtesy of Seth Danielson

Before heading out to sea, we had a pretty good idea of what the surface currents off Barrow looked like because we have a land-based high frequency (HF) radar system that measures them.  The system is pretty slick, it works by bouncing high-frequency radar off waves on the sea surface to measure the speed and direction of the surface currents.  But the system does have its limitations, especially in the Arctic.  HF radar tends not to work so well when there is ice or even when the Aurora is really strong.  In addition, the HF radar only measures currents at the surface, so we don’t exactly know what is going on below.  Deeper water could be travelling with the surface currents, or they could be going in the complete opposite direction. 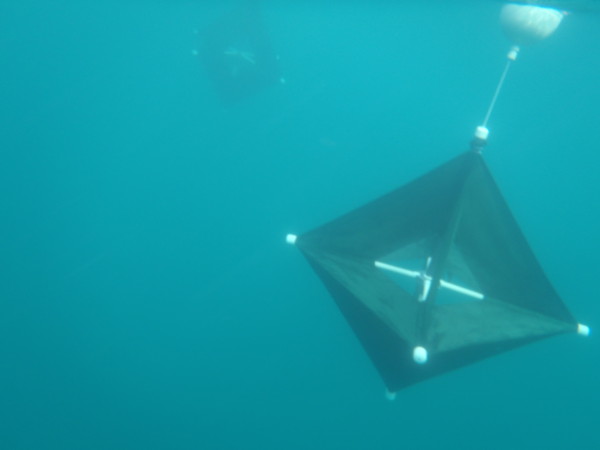 Fish eye view of the drifters. The underwater ‘drogue’ is attached to the surface float, which transmits it’s position to satellites.

So we pulled out some other instruments from our toolkit to verify which way the current were headed. The first were surface drifters. These basketball-sized globes float and drift with the surface currents.  Each drifter is deployed with a “drogue”, a glorified umbrella that hangs beneath the surface float and forces the drifter to be dragged with the ocean current rather than be pushed by the wind.  What still blows my mind is that we track these little gizmos with satellites. Satellites that are in SPACE!  Every hour, they send out their coordinates while we sit comfortably with coffee in our lab watching them float away on Google maps.  You can check out their sometimes squiggly tracks here

But we still didn’t know what was going on below the surface.  So we decided to send out underwater robots to follow the drifters.  You heard me right, we frickin’ deployed oceanographic robots! Our robots are formally known as gliders because of the way they fly through the water, but ocean robots just sounds so much more badass. The robots fly up and down in a zigzag pattern by changing their buoyancy, measuring different sea water properties. While piloted by other scientists onshore, our robots are fairly smart and can navigate themselves independently to a specified location.  But sometimes they can run into trouble if caught in an eddy or strong current and need little corrective nudges from the pilots onshore. 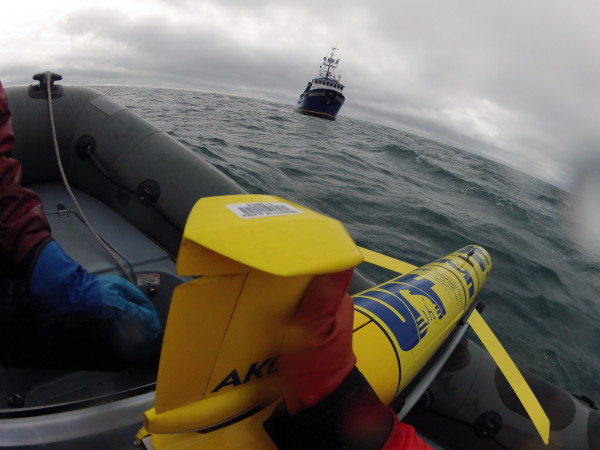 And what happened after we deployed the drifters was wild. Normally, because of the winds and waves, drifters tend to disperse or spread out from each other.  But when we went to recover them 3 days later, we found out them in exactly the same size cluster as when we had deployed them.  Not what we expected at all.

This may be because we deployed them in the Alaska Coastal current, which was screaming that day. Speeds over 4 knots were observed! In ocean terms, this was incredibly fast. Faster than even the Gulf Stream off the eastern shore of the US.  But then again, the other group of drifters we deployed (and did not pick up) in the ‘slower’ region also remained in a clump.

We are still trying to sort out exactly why the drifters moved the way they did.  But since we picked up the drifters (which isn’t normally done but we did it because they were so conveniently clumped), we are just dumping them back in the water.  And we will get a rare chance to repeat our initial experiment. Awesome.

5 Replies to “Notes from the field: Find the currents, deploy the ROBOTS!”