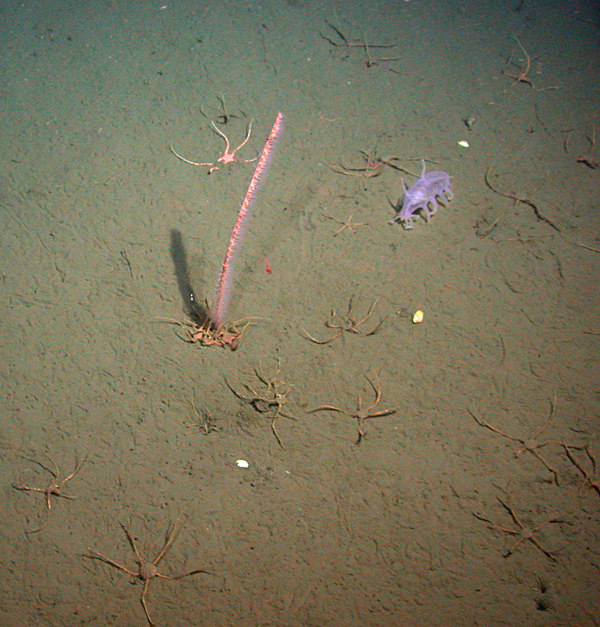 Brittle stars, a sea pen, and sea cucumber dealing with the lack of energy on the deep-sea floor.  Photo courtesy of MBARI

If energy is the currency of life then deep-sea organisms are in a long-term recession.

Energy comes in three major forms important for life:  solar radiation in the form of photons, thermal kinetic energy as indexed by temperature, and chemical potential energy stored in carbon compounds.  In the deep sea, these three forms are either absent or minuscule.  Except in a few rare places, the temperature of the deep oceans is near or below freezing.  In the dark depths, kilometers down, the sun does not visit.  Without the sun’s rays, photosynthesis and plant life, the carbon base of the food web in most habitats, are absent.   The chemical energy that sustains most deep-sea organisms is sequestered from sinking particulate organic carbon, marine snow, derived from dead organisms and feces from the ocean surface above.  However, of the total food at the surface less than 1% makes it to the abyss.

This limited energy, of any type, makes the deep sea one of the most energy deprived habitats on earth.

The deep sea’s future? Even more recession and its likely to be worse.  The oceans are and will continue to produce less phytoplankton, i.e. chemical energy.  Indeed,  global phytoplankton production has declined at a rate of ~1% over the last century, meaning less marine snow and dinner sinking to seafloor. In some places, the oceans have seen ~50% reductions over the last decade.  Whereas chemical energy is decreasing, thermal energy is increasing.   The deep Mediterranean Sea has warmed by 0.12°C since the middle of the last century. Deep oceans now store 16-89% more heat.  However, this increase in thermal energy will make the recession worse not better.

In the Proceedings of the National Academy, I along with  Andrew Allen of Macquarie University, Derek Tittensor of the United Nations Environment Programme World Conservation Monitoring Centre, and Michael Rex of The University of Massachusetts, Boston seek to address how the deep-sea biome across scales of complexity will respond to energy limitation and how they might respond to continued changes in the oceans.  In terms of the analogy, how will the recession impact individuals and families to communities and eventually up to the global economy? 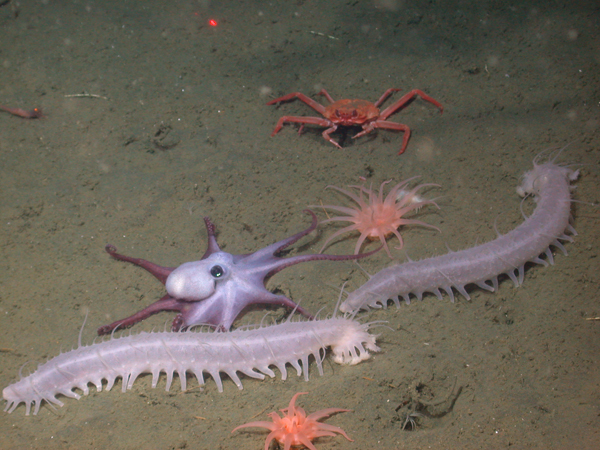 A Tanner Crab, octopus, sea cucumbers, shrimps, and soft corals wait patiently in cold waters for their next meal from above. Photo courtesy of MBARI

Temperature impacted individuals, including their respiration and growth. Deep-sea animals, like any other animal, living in warmer temperatures have faster metabolisms. Food impacted communities much more than temperature.  Less food meant fewer individuals could be supported and less diversity as well.    Interestingly, we also found hints that a restricted caloric intake, a harsh reality of life in the deep sea, led to longer lifespans in some fish.

However, the story is complicated by body size.  Body size impacted all of these relationships.  For example, larger animals have longer lifespans and higher respiratory rates.  The greatest predictor of body size in the deep sea is the amount of food available.  So food even impacts individuals by controlling their size.

Our findings, add to a growing body of research, indicating that the deep sea, once thought remote and buffered against climatic change, is greatly tied to changes in the ocean’s surface.  As the oceans continue to change, the deep-sea may function quite differently in the future. For example, increasing ocean temperatures will increase the metabolism of organisms. This in turn will require larger meals, an item even scarcer in the future abyss.

As my coauthor Michael Rex stated, “The news is not good. Changes in temperature and food availability associated with climate change could cause widespread extinction in the deep ocean if environmental changes occur faster than deep-sea organisms can respond by shifting their ranges or adapting to new conditions.”

3 Replies to “The Great Recession of the Deep Oceans”