What if your physical characteristics (hair color, height, or eye color) were determined by your bacterial microbiome? It might seem far fetched for humans, but for some marine species, this is a fact of life.

We recently had a foreign emissary visit the lab, one Catherine Burke from the University of Technology in Sydney, Australia. She presented a very interesting collection of work on interactions between microbes and marine algae (you know, that delicious seaweed they serve in Japanese restaurants). Normally I fall asleep at the mention of any plant-like species, but Catherine’s talk was full of awesome research.

The coolest thing I learned: apparently some algae get their shape (and boost their growth rates) courtesy of resident bacteria. This shiz is crazy! If algae spores are treated with antibiotics (killing all their surface bacterial communities), they will grow into some nondescript blob resembling a ball of snot (see Figure 1A and 1C, below). But if you leave the bacteria alone, you get an amazing array of twisting tendrils–the extent of which varies depending on the exact bacterial strains which are present (Figure 1D vs. Figure 1F). Boy, I wish I could grow some extra arms if I smeared myself with bacteria…imagine how much SCIENCE I could do with 8 hands! 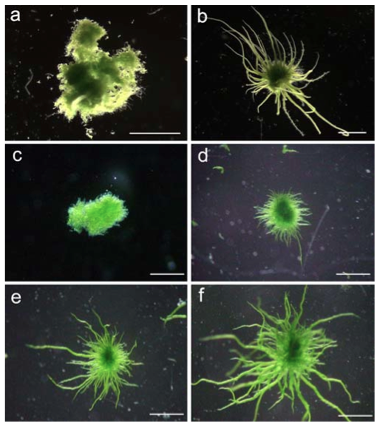 When the algae Ulva linda is treated with antibiotics, it is pretty boring, growing into a shapeless green blob (Figures A and C). Presence of bacterial communities instead result in a beautiful mass of tendrils (B). Figures D-F represent algal spores grown in the presence of different bacterial strains (Marshall et al. 2006)

The story is more complicated than just the cool morphology. Although surface microbes can affect algae in similar ways, the bacterial strains lurking on the algae (Marshall et al. 2006) are pretty spread out across the Tree of Life. Its not just one group of close relatives having all the fun. And the amount of bacteria doesn’t matter either–a couple bacteria from one strain could have a huge impact on algal growth, while dense abundances of a different strain might not have any visible effect.

Who needs vertebrates–stuff like this is the reason I love microbiology!

There’s probably a whole spectrum of algal/bacterial interactions yet to be discovered. It its, however, increasingly clear that the algal microbiome (like all other microbiomes) is something we should be studying. In addition to inducing kickass morphology, there’s evidence that bacteria can produce vitamins for algal host, and contribute chemical cues for algal sporulation and settlement.

One Reply to “Algal blobs take shape, thanks to bacteria”