News of an rogue iron-dumping experiment off British Columbia, Canada, broke in the Guardian on Monday, and was followed up by the New York Times, the New Yorker, and io9. Dr. M explained why this was appalling news, and ever since we’ve been having a vigorous discussion in the secret Deep Sea News lair on exactly how to visualize this bloom. None of us are satellite experts, and the satellite image included with the Guardian (which was reproduced all over) was extremely hard to interpret. It was hard to tell if there was a bloom or just natural swirls and eddies. 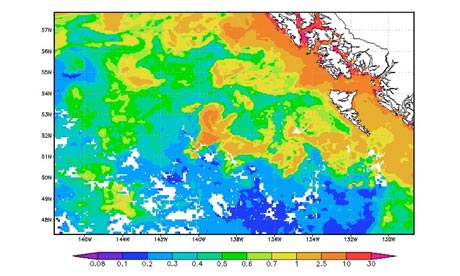 Fortunately, Jim Acker of NASA Goddard Earth Science Data and Information Services Center [apologies! -MG] was on the case. His analysis of satellite data, using the Giovanni information system, is so interesting that I am coming out of my dissertation-writing hole specifically to highlight it. First, to prove that there’s a iron-related phytoplankton (microscopic ocean plant) bloom, you have to show that there wasn’t a bloom there to start with. This satellite image, taken July 19-26 2012, shows the chlorophyll-a concentrations in the surface ocean – warm colors mean more chlorophyll, which means more phytoplankton, and cool colors mean less. You’ll see in the image below that there’s more phytoplankton near the coast, which is normal for this area of the world, but that offshore there is far less. (The white means no data, since there were clouds in the way of the satellite’s sensors.)

The iron was purportedly dumped in the beginning of August, but clouds mostly blocked the satellites around that time. The next good image was taken between August 20-27, and clearly show a bloom (large orange blotch) offshore .

On August 29, the clouds almost entirely disappeared, allowing a really clear view of the area. This is a pseudo-true color image from the MODIS satellite, courtesy of Rob Simmon – if you were looking down from space, this is what you might have seen. The light-colored swirl is likely a coccolithophore bloom – a type of phytoplankton with a calcium carbonate shell. If you look carefully, you’re see blackish water both above and below the light swirl – that dark color means that there’s some other kind of phytoplankton bloom (not coccolithophores) there too. The water is dark because all the phytoplankton is sucking up light. 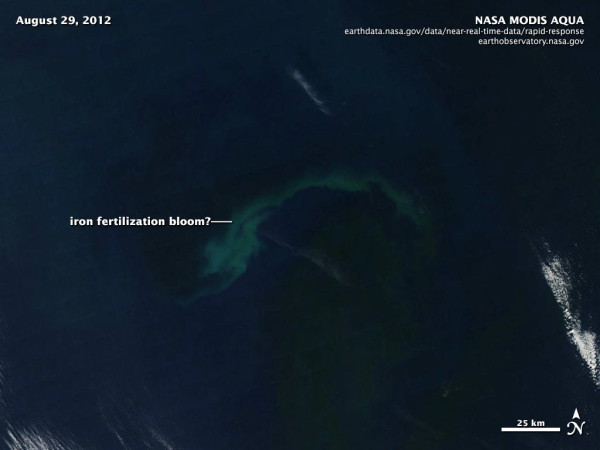 By September 5-12, the iron fertilization bloom was mostly gone. The area where it used to be is no longer a big orange blotch, but mostly green and yellow, with a few areas of orange.

I’ve highlighted just a few of the wonderful and informative Giovanni visualizations – there’s a lot more over at their website. I encourage you to check them out. But in short, did Russ George’s iron dumping actually cause a plankton bloom? It does seem that it did.

UPDATE 19 Oct 2012 10:20 AM PDT: Jim also looked at the chlorophyll anomaly over 10 years of MODIS Aqua data with Giovanni. The area of the purported iron fertilization is 2-5 mg per m3 higher.