So you are on research cruise. And in your state of unadulterated science glee you decide that you want to share with the world your knowledge of this awesome oceanographic research instrument called “the CTD.”  However, in the immortal words of Kanye West, “I’m really happy for you and Imma let you finish, but…” a lot of you have been doing it wrong.

First off, it’s probably not your fault that you have been doing it wrong. On behalf of the physical oceanography community, I’m going to start off with an apology.  We have been unintentionally misleading you.  Below is a picture of what is commonly called “the CTD.”  That is the colloquial name for what is actually several types of equipment all mounted on one common platform.  “Deploy the CTD!” is just a lot more convenient than “deploy the rosette containing the CTD, oxygen sensor, fluorometer, scatterometer, and 24 Niskin bottles!”  And nearly all these photos of “the CTD” have one thing in common, you can barely see the real CTD.

Deployments of “the CTD” may not be photographed unless the weather renders the sea state to be sufficiently hairy.

What you mostly see in a photo of “the CTD” are giant grey tubes arranged in a circle on a metal frame. The tubes are Niskin Bottles, which are used to collect samples of seawater as the frame is lowered to different depths. Some frames are so large that they have 36 bottles on them (fun fact: at my current place of employment they are built in the parking lot they are so big). Niskin bottles don’t actually measure anything, so they are technically not a “sensor.” But as you can see, the Niskin bottles take up a lot of real estate. The instrument that is actually the CTD has to be placed underneath this ring of water sampling power. And that is why you can’t see the CTD in most photos. 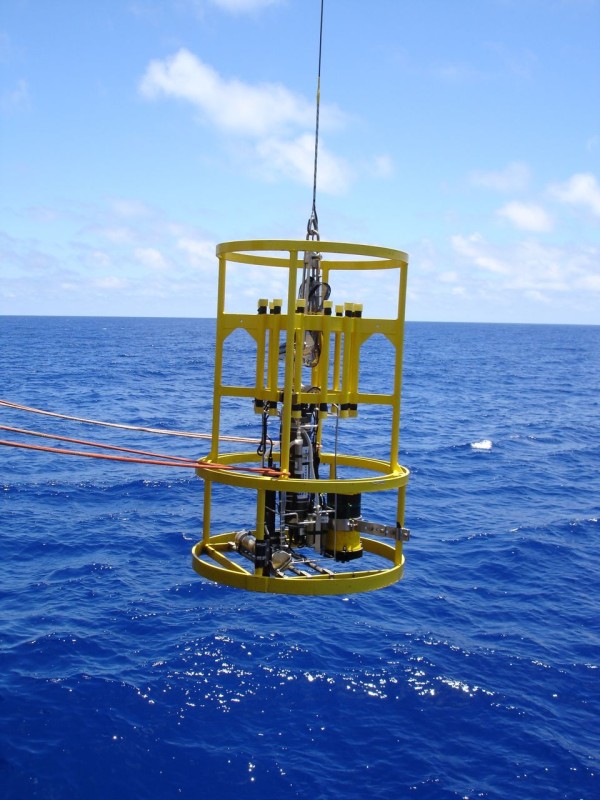 So then what the hell is a CTD? The name CTD is an acronym for “conductivity, temperature and depth”, the three quantities which this instrument measures. The CTD does this with three different sensors: a thermistor, a conductivity sensor and a pressure sensor.  These sensors do not sample or collect water, that is what the Niskin bottles are for. What the CTD does do is to measure these quantities “in situ”, in their original place. Even more specifically, as the instrument is lowered water is sucked into a tube by a small pump, passes these three sensors sampling at 24 times a second and is then immediately spit back out. The data are then relayed back to the shipboard computer through the steel cable that is used to raise and lower the entire frame. Profiles can take anywhere from 10 minutes to 10 hours depending on how deep you want to send your science package. Fun fact: standard CTD’s can’t go deeper than 5 kms. It’s not because pressure will crush the instrument, but rather a steel cable longer than 5 km is too heavy to safely be deployed from a ship!

Apparently, we oceanographers are not an imaginative bunch. Nearly all of us love to describe the CTD as “the workhorse of oceanography” (mostly because the “donkey of oceanography” just never quite caught on).  But it really, really is a fantastic instrument that revolutionized oceanography. The CTD literally enables us to see inside the ocean. Conductivity, temperature and pressure are converted into other quantities such as salinity and density, that reveal the ocean’s vertical and horizontal structure (I talked about this in a previous post). Check out a beautiful cross-section of salinity across the Atlantic Ocean obtained with a CTD below. There are salty blobs and layers at different depths and distances. But this map only shows the big picture, at horizontal scales of 100’s of kilometers.  There are even smaller layers within the ocean at scales as small as cm’s creating even more complex vertical and horizontal patterns.  And we can see all this each time we plunk our venerable CTD into the sea.

Using my trusty CTD, I see inside you Ocean Atlantico. The red blob in the upper left is the salty Gulf Stream off the US coast. The red rolling stone tongue on the right is also salty water, but is Mediterranean overflow water.

Now that you have learned how to identify the CTD in its natural habitat, please help spread the word. The CTD is actually a specific instrument on that giant hunk of metal and plastic you just lowered into the abyss. It only measures three things, temperature, conductivity, and pressure. And the CTD sensor does not collect water to bring back to the surface. That is Niskin bottle’s job. But don’t worry, you can still yell “deploy the CTD” while at sea. Everyone oceanographer worth their salt is gonna know what you are talking about.

9 Replies to “The venerable, yet chronically misidentified, CTD”