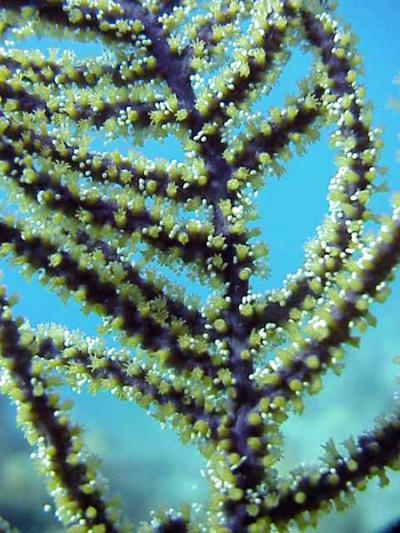 You might be surprised to learn that an ingredient in some skin crèmes is coral, or more accurately coral extract.  More specifically, Pseudopterosin A is a topical anti-inflammatory agent derived from the sea whip Pseudopterogorgia elisabethae and often included in beauty products.  P. elisabethae from the Bahamas possess higher concentrations of pseudopterosins than populations elsewhere.  As expected, workers in Bahamas prune branches from large corals to obtain pseudopterosins.

The pruning, as opposed to completely harvesting, is thought to leave a still healthy population of corals behind, ready to be pruned later. After prunings in 2002 and 2005 and before the annual spawning, Christopher Page and Howard Lasker examined 24 pruned corals and 20 unpruned corals.  What the researchers found is that although colonies appeared healthy pruned corals produced less eggs.

Why would pruned corals produce less eggs and sperm?  When organisms are injured more energy is diverted away from reproduction and toward repair.  Interestingly, this pruning may actually also be creating artificial selection.  If workers are targeting larger and fuller corals to prune, then smaller less thick corals will be reproducing more and eventually become more dominant.

So although you may get more sex by rubbing coral on your face, the corals won’t be so lucky.

3 Replies to “By trying to look sexier you may be ruining sex for corals.”