Deep-sea biology fans can geek out this week by following the proceedings of the 13th Deep-sea Biology Symposium taking place in Wellington, NZ (3-7th December) – the tweets have already begun to roll in under the hashtag #dsbs2012!

Word on the street is that there are ~200 deep-sea biologists attending, and the one and only James Cameron will be delivering a plenary talk about his badass Deepsea Challenge submersible on Tuesday morning. Unfortunately I couldn’t attend this year, so I’ll be following along online whilst drowning my sorrows in Grey Goose martinis (and maybe inventing a twitter-based drinking game?).

Day 1 has already seen some über cool stuff, such as the new iDeep app being released for deep-sea taxonomy. What other exciting news will unfold?? 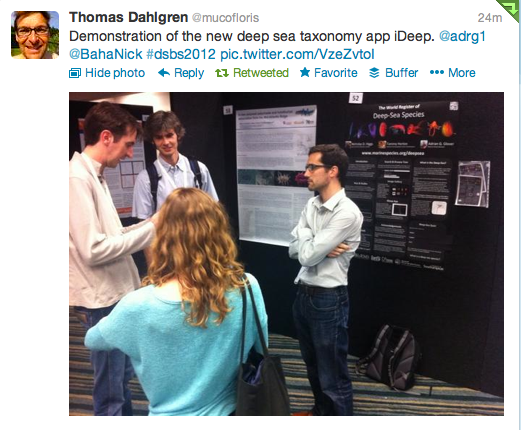