If you haven’t already heard, Discovery Channel announced that they have captured Architeuthis dux, aka the Giant Squid on video. 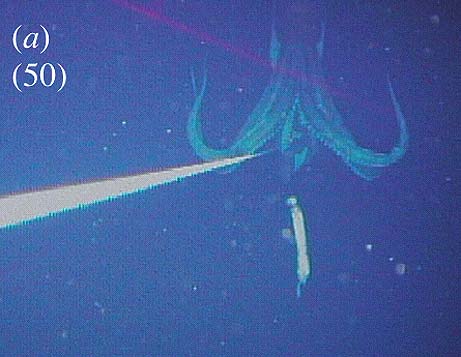 This is the first time a Giant Squid has been captured on video at depth.  In 2005 Tsunemi Kubodera of the National Science Museum in Tokyo and Kyoichi Mori of the Ogasawara Whale Watching Association reported in the journal Proceedings of the Royal Society B (the full paper is freely available here) the first ever photographs of live Giant Squid (photo above).  The photographs are from 2,950 feet (900 meters) beneath the North Pacific Ocean of an individual measuring ~25 feet (8 meters) long.

In 2007, Kubodera again managed to capture evidence of live Giant Squid, this time in video at the surface (video below).  This specimen was a juvenile at ~11 feet (3.5 meters). The new Giant Squid video is supposed to differ as the specimen is alive and at depth, i.e. below the surface.  The Giant Squid in the video below is on the surface and likely dying, as Giant Squid cannot survive in warmer surface waters.

Both specimens were caught off the Ogasawara Islands.  As Kubodera and Mori reported in their 2005 paper

Each year between September and December, sperm whales gather to feed in deep water off Ogasawara Islands (ca 26–27 N, 142 E) in the North Paciﬁc Ocean. Reports in recent years have demonstrated that giant squids are present in the region and are one of the target prey species of the sperm whales (Mori 1997; Mori et al. 1999).

Now admittedly I was skeptical at first. Discovery Channel aired the festering heap of disingenuous television that was Mermaids.  So pardon me if I’m a tad bit skeptical about any claims of “actual video” they may have.

But from various contacts that I trust, I hear the video actually exists, a full 18 minutes of it in full HD format.  I have no other details at this point as Discovery Channel is silent outside of their abysmal press release.

My guess is that the video was probably caught off the Ogasawara Islands again, as this seems to be the go to place for Giant Squid candids.  I also suspect that Kubodera is involved in the project as well as Steve O’Shea.  Steve O’Shea, a long time friend of DSN, has long been known to be working toward the Giant Squid video goal.

As I get more updates I’ll let you know.

I’ll finish with the choice of Discovery Channel’s title for the show, Monster Squid: The Giant Is Real. I don’t know what to hate most.  First is the use of the term monster and the connotations it evokes.  Since when is a Giant Squid a monster?  What is monster supposed to imply here? The other part of the title that bothers me is the Giant Is Real as if every member of the public doesn’t know that Giant Squid are real.  It is also a slap in the face to every scientist who studies Giant Squid and ignores the 100’s of specimens and papers published on them.  <sarcasm> Thank you Discovery Channel for coming along with your fantastic video and proving once and for all that Giant Squids exist.  I wouldn’t know such horrible monsters were real without your important contributions </sarcasm>.  Seriously, Discovery Channel‘s  title reeks of desperation.  They could have called it Hey we have Giant Squid video and everyone would still watch.

8 Replies to “Giant Squid on Video?!”