The Klingon Bird of Preys were first introduced in Star Trek III: The Search for Spock.  Two classes existed, the B’rel-class and the K’Vort-class, roughly scout and light cruiser classes.  They were formidable ships, not only because of their lovable Klingon crews, forward torpedo launchers, and disruptor cannons, but because of their cloaking abilities*. Moving from the dark depths to the twilight zone** any animal with cloaking abilities would rule the ocean.  Well maybe they wouldn’t’ be like ocean royalty but they would do alright. 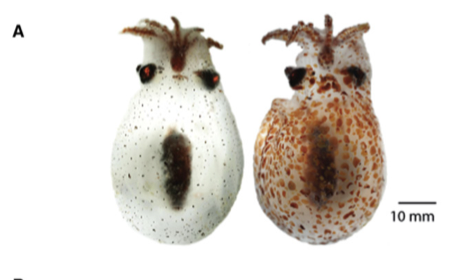 Nearly every group of animals has a transparent brethren that lives in the well-lit open ocean.  In darker deeper water, a majority of denizens are red or black.  In both cases, this coloration or lack of serve to cloak the animal.  But what’s an animal to do if they are in between these zones, not a sharp boundary but a grey area full of scoundrels  or needs to migrate between the two.  A red or black creature in ligher shallower waters easily contrasts against the light coming from above.  A transparent animal, finding itself in the deep, would be easily distinguishable from the direct light cast from another organism’s bioluminescence.  If only like a Bird of Prey an organism could shift between cloaking and no cloaking. 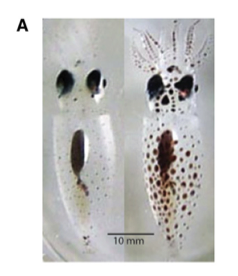 Two such creatures the octopus Japetella heathi (right) and the squid Onychoteuthis banksii (left) can do exactly this.  When you shine a direct light on the normally transparent Japetella heathi or Onychoteuthis banksii, mimicking a bioluminescent beam, its chromatophores are triggered turning the animal opaque. But the octopus, like a crafty Klingon,  is strategic in triggering the chromatophore response.  Objects or shadows near the octopus did not trigger a response.  Yet tactile, i.e. poking it with a probe, a big stick, or whatever is nearby, or blue light did activate the cloaking device.

Both animals consistently reflected 2x as much light when in the transparent mode compared with the pigmented mode. Indeed in the cloaked state, the octopus was able to achieve the same reflectance of the red and black fishes and invertebrates of the deep.

These cephalopods seem to understand the ancient Klingon proverb tugh qoH nachDaj je chevlu’ta’ or A fool and his head are soon parted.  Best be no fool and cloak often***.

***not really related to this post but I feel compelled to say KKKKKKKHHHHHHAAAAAANNNNNN!!!!!!!