These are salt fingers. The eerie fingerlike structures are caused by sinking blobs of warm, salty water interleaving with rising blobs of cold, fresh water.

This is a thermohaline staircase. Thin sheets of well-mixed water stack on top of each other to create a stepped vertical profile. 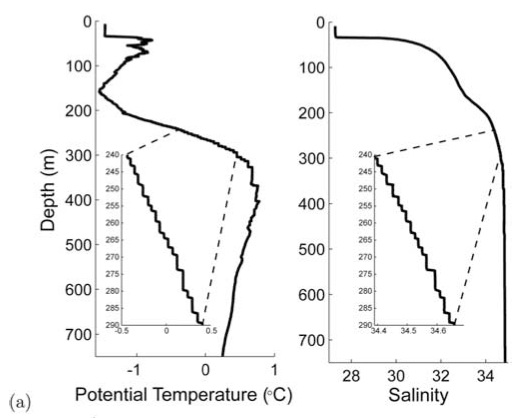 But these two seemingly different oceanic phenomena have something in common. They are both caused by the same process, double diffusion.

Diffusion means the spreading out of a certain property or particles. When you fart on a plane and then you sit really still hoping no one notices but the stank still manages to escape and terrorize everyone in a 3-row radius, that is diffusion. Similarly, diffusion occurs in the ocean. But fart particles in the ocean don’t spread out as fast as when you are on a plane because diffusion in water is much slower than diffusion in air (technically farts don’t actually diffuse in water because they are mostly air and just rise to the surface. You can test this by farting in your bathtub, for science of course). In fact, diffusion in water is so slow that other transport mechanisms like mixing and currents would spread your aquatic fart particles throughout the seven seas. But when these other oceanic processes are minimized, diffusion is the boss!

Diffusion in sea water also doubles your pleasure and your fun. Double because sea water has two characteristics that diffuse, salinity and temperature. What makes double diffusion so special is that heat and salt don’t spread out at the same rate. A warm, salty blob of seawater will lose heat nearly 100 times faster than it will lose salt, so it will become colder long before it becomes fresher. And this is what leads to an ocean full of staircases and fingers.

To really appreciate the beauty of salt fingers, you need to watch them form. You could do this with a little mini-experiment at home (which I tried and failed at today, but will try again tomorrow) or just check out the simulation I pasted below.

The conditions to create thermohaline staircases can be found all over the globe. But they can easily be destroyed due to turbulence which muddles the fine layers together. But there is one ocean where thermohaline staircases reigns supreme, the Arctic. Here sea ice and stable stratification quells the processes that typically mix oceans at lower latitudes, allowing the staircases to persist. At the surface, there is a cold, fresh layer of water due to ice melt and terrestrial river runoff.  Just beneath is a layer of warm and salty water which originates in the North Atlantic and circulates around the Arctic. Staircases are formed between these layers. But staircases can also be found in the Caribbean Sea driven by warm evaporation at the surface and beneath the salty tongue of the Mediterranean outflow in the Atlantic.

Thermohaline staircases can even be found in bodies of freshwater such as Lake Kivu on the border of Rwanda and the Congo, where seeps due to volcanic activity create a layer of warm, salty water under the cool, fresh lake water. But these staircases also have a sinister side. The stability that allows the formation of staircases also traps dangerous gases such as carbon dioxide and methane at the bottom of the lake, which could potentially explode. Similar “lymnic explosions” have been documented at two other lakes, with deadly consequences.

Finally, I leave you with this little nugget of joy. This is the illustrated description of the discovery of double diffusion from the Collected Works of Henry Stommel. Because no one can resist impromptu science. 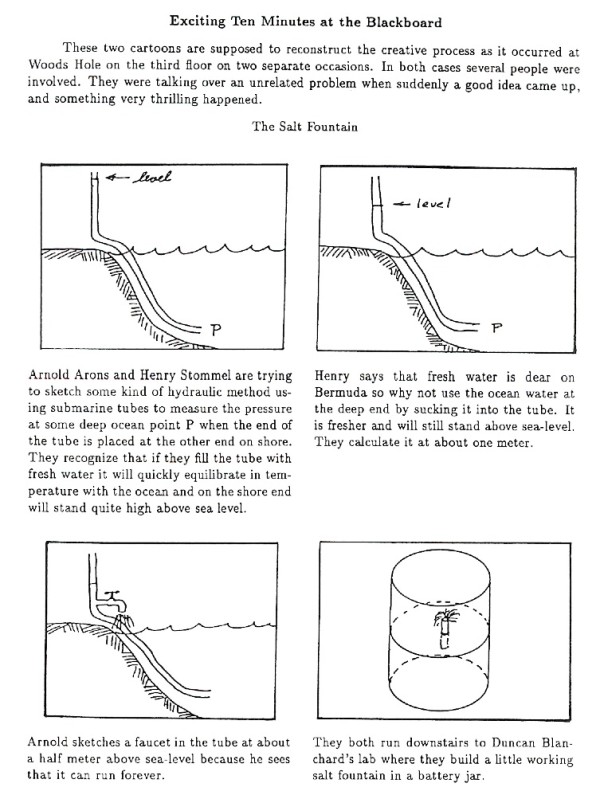 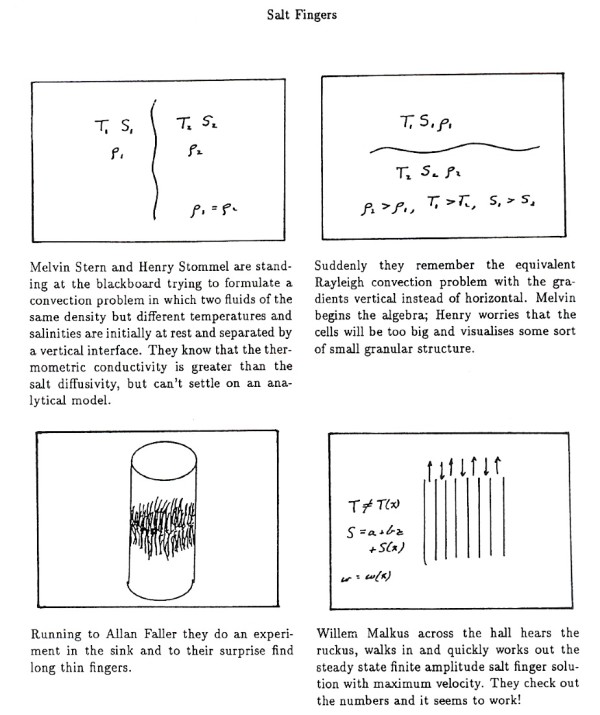 2 Replies to “Ocean staircases and salt fingers, the curious case of double diffusion”