Undoubtedly you’ve already seen the above video of deep-sea squids mid-coitus at 1400 meters (0.86 miles) deep in the Gulf of Mexico.  The male and female Pholidoteuthis adami are unconcerned with the lights, cameras, and audience. However, you may not know what is actually going on here.  Well you may have some idea.  Well I’m going to give you all of the scintillating details as if I was Miranda on Sex on the City.  And yes I’m embarrassed I both know and made that pop cultural reference.

Stop reading here if you are at work.

First, the male is on top and the female is on bottom, facing opposite directions.  The pair is in sort of twisted missionary or inverse, reverse cowgirl.  The female is actively swimming with her fins.  So it is more a moving-inverse-reverse-cowgirl.  This position is so far unique among squids who typically prefer something closer to missionary.  Although there are several hypotheses for this, one of my favorites is it prevents the female from grabbing and eating the male. It happens.

From the picture below you can see he has a three way grip on her.  Two arms extend above her fins, another two below, and another two straddle her mantel (i.e. body). The arms are labelled AII-AIV in the photo for arm pairs two through four.  Yes the arm pairs in squid are numbered! In museum specimens scarring actually is found on females from being held tightly and passionately. 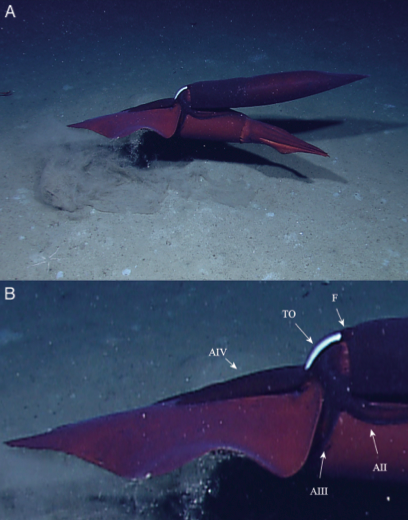 So in the video and photo above that white think labelled TO, terminal organ, is mister winky.  The male here is not inserting the terminal organ into the female.  Think of this more as a firehose scenario but instead of water its packets of sperm.  In specimens of females, most of the spermatangium were found deeply embedded in the muscle of the mantle near the base of the fins. It may be the moving-inverse-reverse-cowgirl position also allows for greater movement of the firehose.

H. J. T. Hoving and M. Vecchione Mating Behavior of a Deep-Sea Squid Revealed by in situ Videography and the Study of Archived Specimens Biol Bull 2012 223:263-267