If you haven’t seen this video, than you must!  It is an amazing intersection of human adaptation with oceanic phenomena, in this case the Inuit of Kangiqsujuaq, Quebec and how they exploit the large tides to collect mussels under sea ice. I stumbled across it as a free download for a long plane ride.

What makes this feat possible is the fortnightly spring-neap cycle of the semidiurnal tide and tidal resonance in Hudson Strait.  Everyone totally understood what I said there, right?  Just kidding, I’ll quit with the jargon and explain it to you in human terms. What it roughly means is that these two phenomena cause really REALLY big tides.

First let’s tackle ‘the fortnightly spring-neap cycle of the semidiurnal tide.’  A semidiurnal tide is a tidal cycle that happens twice a day or about every 12 hours.  That means there are two high tides and two low tides each day.  Tides are caused by the gravitational attraction of water to celestial bodies (I’m not going to go into the painful detail of what causes tides, but you can read more here).  And on earth, the two main gravitational players are the sun and the moon.  Now, both celestial bodies cause semidiurnal tides, but the lunar and solar tidal semidiurnal cycles are not the same length.  To be precise, the solar semidiurnal tidal cycle is 12 hours, while the lunar semidiurnal tidal cycle is 12.42 hours.  Almost the same, but not quite.  When you add these two cycles together, at first they might seem like they are in phase, meaning the high lunar tide and the high solar tide occur at the same time.  But as time progresses, these two tides become out of sync due to the slight difference in cycle lengths.  After 7 days, the lunar and solar semidiurnal tides are completely out of whack (sort of like my rhythm when I start daydreaming in Jazzercise).  They cancel each other out causing a decrease in the tidal range.  But fear not, after another 7 days the lunar and solar semidiurnal tides get themselves back in sync and add together again.  This causes very, very high tides and very, very low tides.

Using the awesome power of Matlab, I’ve illustrated this cycle below (the amplitudes don’t reflect those observed in Hudson Strait).  When the lunar and solar cycles coincide, you get the hot pink spring tide.  When they don’t, you get the cool blue neap tide.  And as I said this cycle of spring and neap tides occurs every 14 days, thus the appropriate use of fortnightly. (P.S. fellow Americans, this is the only time you can use fortnight without looking like a pompous twit. This is a personal opinion of course.) 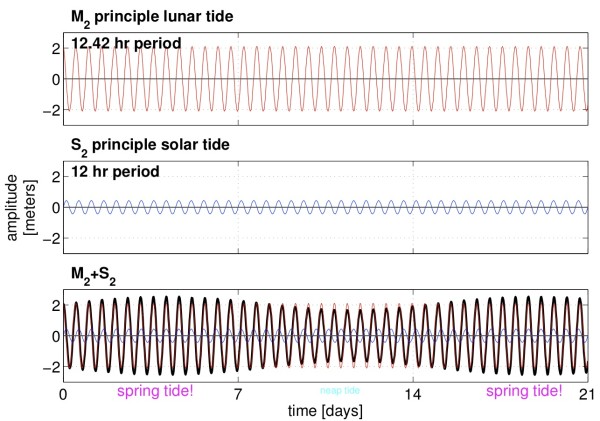 Beating of the the lunar and solar semidiurnal tides makes the spring-neap cycle. The black line in the bottom plot shows what happens when you add together two tides with slightly difference cycle lengths.

To hunt mussels, the Inuit take advantage of the very, very low water levels during the spring tide. And they can tell when this occurs by just looking at the moon. Spring tides occur when then the sun and moon align, in other words during either a new moon or a full moon! Local knowledge FTW!

Now the spring-neap cycle is not unique to the Hudson Strait area.  But what is unique is the second trait that causes the large tides in the Hudson Strait area, tidal resonance.  Resonance makes big oscillations at certain frequencies. Resonance is what makes musical instruments play individual notes. Resonance is what shook the Tacoma-Narrows bridge into oblivion. Resonance is what makes subwoofers rattle your windows while you drive through the wilds of Alaska listening to Justin Bieber. Only me? Well OK then. Resonance is also what makes the tides in Kangiqsujuaq so large. The resonant period in nearby Ungava Bay is 12.7 hours, which is very close to the semidiurnal period.  Therefore, semidiurnal tides near Kangiqsujuaq are like a perfectly tuned subwoofer, jiggling the ocean and causing tides large enough for the people of Kangiqsujuaq to head under grounded ice to hunt mussels.

Lastly, the narrator claims that this is the only place on earth where the tides are large enough for the under-ice mussel harvest to happen. This is just not true. Kangiqsujuaq does have rather large tides, but so does the rest of Hudson Strait.  In fact, Ungava Bay just to the southeast may have some of the largest tides in the world and it has sea ice too**.  But as far as I know, those native communities do not harvest mussels under sea ice.  This might be due to differences in the tidal environmental, sea ice characteristics, food availability or even cultural differences, but I really don’t know. But no matter what, under-ice hunting is an incredible way to get a mid-winter shellfish treat. 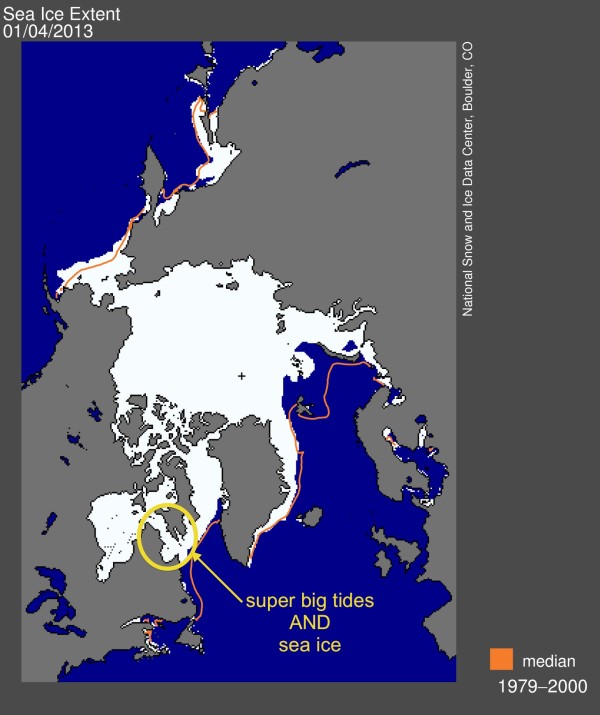 Ice map from the day I wrote this article. The next new moon is Jan 11. People of Hudson Strait, you have 6 days to prepare!

** Both the Bay of Fundy and Ungava Bay claim to have the largest tides in some sort of oceanographic pissing contest. The truth is their maximum observed tidal ranges are statistically indistinguishable and we won’t find out which is larger until 2014 when the extreme highest tides occur.  I am waiting. Anxiously.

5 Replies to “Tides, Ice, and Mussels: The science behind the harvest”