Th example might be an obvious one but worth the mention.  Male seahorses possess a pouch on their frontside, similar to kangaroos.  During mating, the male will  pump seawater into the pouch to expand and reveal its sad emptiness to the courting female.  The female, feeling very bad about the emptiness, will then deposit eggs into the pouch. She does this deed with her ovipositor, an appendage for egg laying just like the one of the Alien Queen in Aliens. The male now washes the eggs in sperm.  The fertilized eggs will eventually become embedded in the pouch wall and surrounded by spongy tissue. Gestation can last anywhere from 2-4 weeks.  Using muscular contractions of the brood pouch, the male will birth the young seahorses.  Depending on the species, males can give birth from 5 to 2,500 young.

Crepidula is a sequential hermaphrodite. During the same course of life, this limpet will change sex from male to female.

The first larvae to settle will be a female.  She will be the larger one on the bottom of a Crepidula sex stack.  Other larvae will land on her back and become males.  Each male in turn will stretch their muscular penises down to the female for a little internal copulation.  When the female dies, the next male in the stack will become the new female.  This begins with the disintegration of that pesky penis.

3. Loricerfa and Cycliophora-What does gender even mean? Let’s do away with traditional moms and dads!

Gender what’s that.  To say the reproductive life cycle of these groups complex or just plain freaky would be an understatement. The Loriciferans were first described in 1983 and since then around 20 species were described with at least 80 species waiting in the wings for their official names.  However, Loricefera were known since the 70′s but because of there complex life cycle with a larva (Higgins-larva) that looks completely different from the adults, things got delayed.  All the species range in size from 108-405 micrometers and live interstitially (between grains of sediment in the ocean). In several species, the larvae can develop 4-12 larvae inside them.  All of these larvae look the same as the original.  This is a B-movie horror plot if there ever was one. Imagining having a child, a few days later they have children of their own and all are identical.  In the group, the life cycle varies from species to species and in the words of an expert “more confusingly, may vary depending on the feeding condition of the larva in the same species.”  Imagine feeding your child creamed carrots instead of pureed peas n’ ham and sending your child down a completely different developmental and reproductive cycle.  I’m sorry little Jimmy you like mashed bananas, you’re a hermaphrodite. In one species, larvae moult into an individual with no gonads. “O’ damn where did my testicles go?” In another species, the larvae are bigger than the adults and develop a humongous ovary.  This ovary can threaten the existence of whole cities.  That last part was made up. In the same species as directly above this larvae forms a cyst-like stage.  More larvae then can grow inside of it which then moult, get very big, and form big ovaries.  Does this remind anyone else of the plot of Gremlins?  No water and no feeding after midnight! 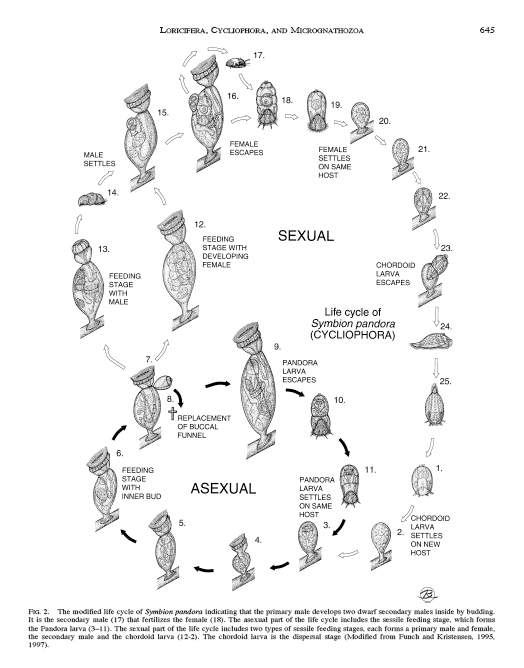 Another group recently described is only known from one species which lives on the setae of lobsters’ mouthparts.  The group is Cycliophora and the species, Symbion pandora. Pandora because its lifecycle is a black box of evil, mystery, and of course really strange sex. That’s it in the diagram above.  Yeah…complicated.  There are both a sexual and asexual phase.  A feeding and nonfeeding phases.  A freaky phase and really freaky phase. The asexual phase has two types of feeding animals.  The first type is called the Pandoral larva and houses the primary male and female inside a brooding chamber it does this by losing both its digestive system and head. I am told that human males also call loose there brains and replace them with reproductive organs. Budding is common.  But not a new little you on the outside but new little you’s on the inside.  Budding is internal. The sexual phase includes a primary male that lacks a penis or true testis.  What’s the point then?  That male settles on a feeding animal.  If the feeding animal has a female inside this cues the male to develop some ‘equipment’. Howevever, the ‘equipment’ is not his own.  He develops two males with a necessary gear. 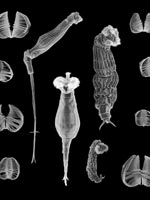 While many animals, from aphids to Komodo dragons, can reproduce asexually from time to time, it’s incredibly rare to find a group that have abandoned sex altogether. The bdelloid rotifers (pronounced with a silent b) are an exception. They live in an all-female world and since their discovery, not a single male has ever been found. Genetic studies have confirmed that they are permanently asexual, and females reproduce by spawning clone daughters that are genetically identical to them.

As Kevin eloquently described in his not necessarily PG rated post…

These chicas are freaky. But if you lived on a whale vertebrae and eat through bone, perhaps you’d be a little on the kinky side too, right? Osedax, the “bone-devouring” worm is weird…this is one critter that would infuse the pope with fear and disgust….What is really cool is that ALL whale bone-eating female worms appear to have dwarf males…There are many (up to 114 in Osedax rubiplumus) males fruiting around inside of a female in what is akin to an internal [word removed because it kept making me uncomfortable but read it in the original post if you dare] fest with the female enthralled in her detestable orgy, covered in the love ooze of her harem. In fact, Rouse et al. followed the worms through time and found that the larger, older ladies had a larger harem size.

Perhaps the Osedax is best describe in song

All nudibranchs are simultaneous hermaphrodites enjoying all the best parts of being male and female at the same time (or maybe the worst parts of both).  As opposed to many other animals where only a percentage of encounters would results in some funky fun time, any rendezvous with another slug can be fun.  Durring sex both sea slugs will give and receive, give and receive  and give and receive some more.  However to make this work nudibranchs must continuously produce eggs and sperm.  Imagine all the energy that takes. Nudibranchs must be consuming calories like an olympic weight lifter who then boinks all the other olympic weight lifters. Check out this great photo of nudibranchs in the act (NSFW?).

7.  Anglerfish-Big females and small males are the norm

This may come as a shock but in most animals females are larger males.  Insects, spiders, fishes, amphibians, and reptiles the males are diminutive and they like the ladies big.  Even in groups, and the ones humans often first think of, where males typically get larger than females like mammals and birds, there are notable exceptions to these rules.  In anglerfish, females are 10x larger the males.  In fact males are essentially free living sperm packs.  Anglerfish males on locating a female will bite her side.  This biting triggers hormones that fuse his lips to her and dissolve his organs.  Eventually, he becomes nothing more than a dangling testis on her side.

In some wrasses, a group of 600 marine fishes, there are two types of males.  One of the males looks like a female.  These feminized males use it as a strategy to sneak in and mate with females without being seen by a large alpha male.  Even looking like a female, allows these males to avoid bullying.  However when the alpha male moves on or dies, BAM he goes all macho. Surprisingly or maybe unsurprisingly, being macho apparently makes him all stupid. Because the strategy he just employed not to long ago is then used on him by other males.

So where to start?  Well let us begin with the fact that both females and males contain all sex organ in their legs.  This is perhaps not shocking given pycnogonids are very spider like (but not spiders) with extremely long legs and very thin long bodies.  There is pretty much no where else to put those gonads other than the legs.  Males, like in seahorses, also take care of the young.  Males keep these fertilized eggs also on their legs.  Yeah I can’t even make this stuff up.

10. Cuttlefish -Transvestites for the win

Single males of the Giant Australian Cuttlefish will dress up like females by actively changing their patterns.  Large alpha males fiercely guard their chosen female from all other males. In tactic simliar to the wrasses, this allows them to sneak in and make love with female while the large alpha male is none the wiser.