Chromodoris posing for the
cutest picture ever taken. Source: NatGeo

Another epic post from Alex Warneke, aka lil’ A

Disposable nudibranch penises are all the rage this month thanks to a study published in the Royal Society’s journal Biology Letters. Undoubtedly a unique skill in the animal kingdom, there is just something about the phrase “detachable penis” that screams ecological epicness.

Despite this extraordinary ability however, these charismatic microfauna reign supreme in my book for a very different reason. You see at the nudi(st) colony they dance to one song and one song only…

Sea slugs may have got the short end of the evolutionary stick with the loss of their protective outer shells, but they don’t let it get them down (a.k.a. eaten). Instead they put on their “hammer pants” and bust out other defensive means of protecting their soft, squishy bodies from hungry predators.

Certain species, like Berthella californica, defend themselves by dropping acid. No, these little buddies are not on psychedelic drugs looking to jump down the rabbit hole. When provoked however, they do have the ability to produce sulfuric and hydrochloric acids from small pouches called vesicles in their skin. Just to put that into perspective, hydrochloric acid is highly corrosive with a pH of roughly 1-2 and is the same acid found in your stomach to dissolve food. Needless to say, predators “Ain’t Touchin’ This” anytime soon.

“The business end” a.k.a. the cerata full of Nematocysts that now protect this nudi getting eaten. Source: Kalker and Schmekel 1976

Moving on to other distasteful denizens of the deep, some sea slugs are down right thieves and steal their defenses from their food. Rude…but awesome. Whether they are eating jellies, sea anemones, hydroids, etc. these guys can take the defensive powers of that which they are eating and use them as their own!

How does this work? Well, if you have ever been frolicking in the intertidal-hood like I have and stuck your finger in an unexpecting sea anemone…like I have…you might have been subject to their sticky tentacles. While you might think this is all in good fun, they are actually trying to kill you with their harpoon-like nematocysts (hence, the stickiness). Now, like us, some sea slugs are also immune to these homicidal anemones. Not only that, but they can ingest these nematocysts without them discharging and place them in their feathery cerata, or their “business end” as I like to call it. When a predator then tries to chow down on the seemingly easy sea slug snack, they find themselves with a mouthful of harpoons and a lunch that is relatively hard to swallow.

You may recall Miriam’s post on the wild blue pokemon-esque Glaucus atlanticus. These misunderstood sea beasties are a perfect example of this type of mechanical defense. 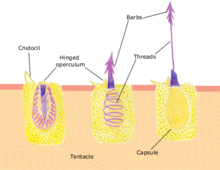 How the nematocysts discharge. Source Biobook. Used under the wikipedia commons license

Finally, there are other groups of nudibranchs, like the Dorids, that somewhat live in the best of both worlds. Their diets consist of sponges with biologically active compounds, called secondary metabolites, which can also deter predators. (Interesting side note: These can be similar to the compounds that are taken from sponges and used in pharmaceutical drugs.) In some instances, these slugs can even synthesis these chemicals on their own without deriving them from their food, like the acids in our first example.

With all of these cool ninja defenses to work with, how are predators expected to know they just “Can’t Touch This.” One hypothesis is that, similar to poisonous dart frogs and other more noxious beasties, these sea slugs have developed Aposematic Coloration. In other words, these little buddies maintain bright, conspicuous color patterns to warn their potential predators to Stop. It’s Hammer Time. 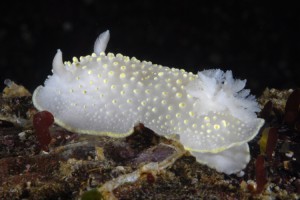 Marin, A. Chemical or nematocyst-based defense in the nudibranch Cratena peregrine?- a reply to B.K. Penney. Journal of Molluscan Studies 75 (2009): 201-202.

One Reply to “Can’t Touch This”