It’s Thursday afternoon at noon and I’ve just finished reading Kevin’s farewell post.  Tears well up in my eyes.  I’ve been emotionally preparing myself for his departure.  The two of us have been speaking about this day for months.  After reading Keven’s farewell, I realize I have not prepared myself enough.  I was going to recount Kevin’s history here but Kevin has done a far better job than I.  Thus I begin my farewell post for Kevin with the end of his:

So, on to the next chapter. I want to thank all the readers here at Deep Sea News, all the bloggers who’ve shared my works and have given me advice and support, my lovely fellow deeplings and in particular Craig for being more than a colleague but a close friend and confidant and co-schemer. I wish we could have done even half of the great things we’ve planned.

The Deep-Sea News you see around you exists because of Kevin.  We both had a vision when we became an independent blog again.  We wanted more than just blog, but a branded social media empire that could make a positive impact.  We wanted to be the ocean voice online.  We were scheming, that’s what we excel at.  Several years later here we are and I couldn’t be more proud. Kevin built our Facebook and Twitter followings.  He found us a hosting service, built this website, and took care of every technical issue.

One of Kevin’s big platforms was about quantifying impact in social media. If we are going to take online outreach seriously we should quantify our audience and the effects of outreach.  Below I give you three metrics, they are basic in that they represent the number of followers we have for our various social media platforms, but they do paint a vivid picture of the success that Kevin helped build. 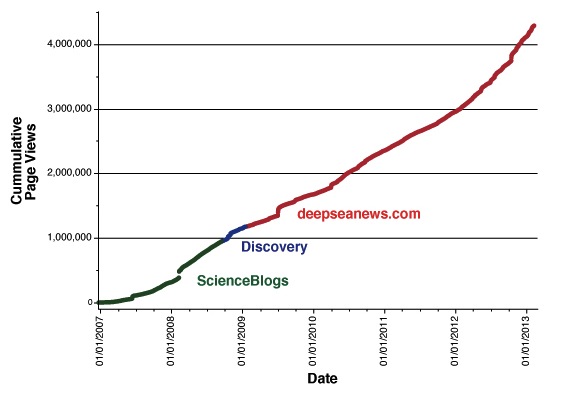 Late last year we hit a total of 4 million page views.  Not to shabby for a “niche blog” dedicated to the oceans.  On a given day, we garner any where from 2,000-3,000 hits.  I remember when Kevin and I got excited about a few hundred.  At Scienceblogs, where we got paid based on our hit rate, that got us each about six pack of beer a month. The Deep-Sea News Facebook page has 3,320 people following and @deepseanews on Twitter has 2,977 followers.  This doesn’t count the successful #deepsn hashtag on Twitter that is used by a larger community to broadcast ocean news.  Kevin recognized early the power of integrated social mediums and quickly leveraged them for DSN.

Of course this traffic also reflects that DSN has a unique voice and something important to say.  Kevin help us establish this as part of a mission and set of core values.  Of course, Kevin and I had been doing these things unspokenly for years, especially that reverently irreverent one, but we felt it was time to formalize these. Of course, Kevin has also contributed heavily to the core of DSN, writing here at the blog.  His posts are a bundle of emotion, information, and fantastic writing in way that only Kevin can deliver.

I could go on for pages about Kevin’s importance to me and DSN.  But because I am not the writer Kevin is, I am at loss for prose.  His departure leaves a wound on DSN, science communication, and the field of science.  I know with time that would will hill and I take solace in knowing Kevin is headed for better things for both himself and his family.

Everything I wanted from Deep-Sea News happened.  Kevin made that happen for me.

I wish we could have done even half of the great things we’ve planned.

My friend we have already accomplished great things beyond compare.