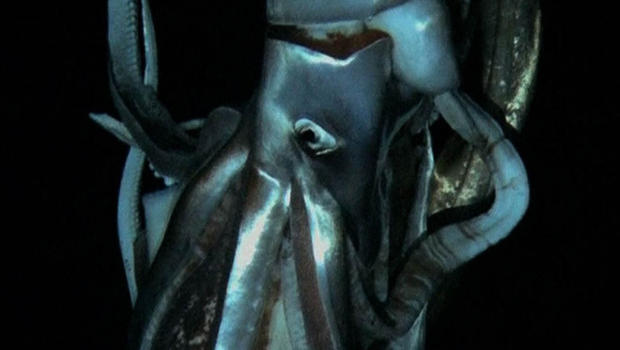 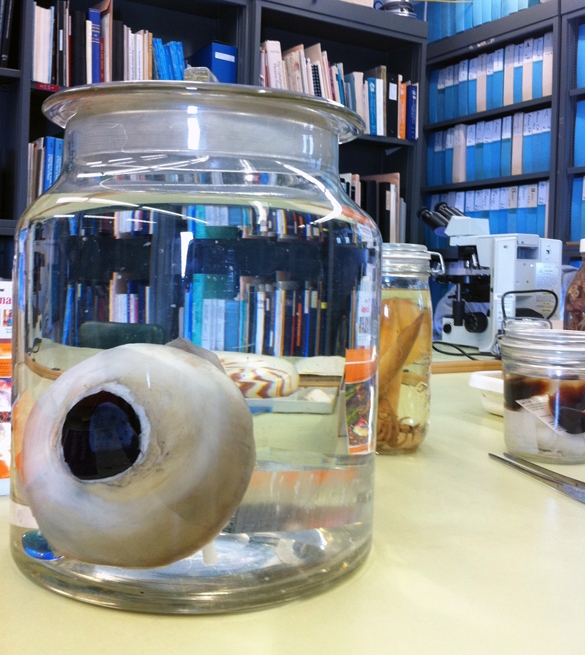 The largest measured giant squid eye is 27 centimeters (10.63 inches), roughly the size of a large dinner plate. Whereas all giant squids don’t have goliath fine china size eyeballs, most are between 5-15 centimeters (~2-6 inches), their peepers are huge. The swordfish has roughly the same body size as a giant squid, yet its eye is just a third of the diameter.

Why are giant squid eyes giant?

Why are the eyes bigger than fish?

Last year scientists proposed that the gigantism of giant squid eyes was a novel adaptation to spot their main predator, the sperm whale [1].  Bigger eyes can take in more light and in general animals living in perpetual darkness, like those in caves and in the deep oceans, possess very large eyes.  However, as Ed Yong describe

“Using a mathematical model, they found that in the deep ocean, eyes suffer from a law of diminishing returns. Small eyes can see dramatically further if they grow a bit bigger. But once the pupil passes 2.5 centimetres, these improvements become tinier and tinier. Once the pupil reaches 3.5 centimetres, and the eye itself reaches 9 centimetres, there’s very little point in making it any bigger. And that’s exactly where fish have stopped. Even though the swordfish’s head is capable of holding a much larger eye, it doesn’t.”

From mathematical modeling, the reason for the giant squid’s large eye is that in the dark a pupil can easily pick up a large and dimly lit object…like your mom (sorry I couldn’t resist).  More seriously, a sperm whale disturbing bioluminescent organisms as it moves through the water would be an easy optical target for the giant squid.

But new work cast doubts on this idea.

First, let’s go back to the beginning.  How large is a giant squid’s eye? If you scale a smaller squid up to giant squid size proportions, would the eye be the same size as a giant squid?

Think of it this way.  If you scaled a Chihuahua up to Great Dane size would its tongue be the same size as Great Dane?  When you make organisms larger all the individual parts must get larger too.

But does this account for all of the ocular size differences? If yes, then we need no special reason to account for the behemoth ocular awesomeness of giant squids.  The giant squid simply has a squid eye as big as it’s supposed to be for a squid.

Lars Schmitz and his team took measurements of body size and eye size for 87 squids. What they found was the eyes of giants and colossal squids were not out of proportion compared to other squids. For giant squids 98.8% and for colossal squid 100% fell within predictions based on other squids. In other words, these massive squids do no have unusually large eyes for their body size.  The authors of this recent study do note that other squids, particularly the bobtail squids, have much larger eyes than you would expect, mainly because their bodies are shortened relative to other squids.

Compared to fish, all squids have very large eyes.  This holds even if the fish and squid are the same size.  On average, Schmitz and his team found that squid have ~1.7 times the eye diameter of fish for any given body size. 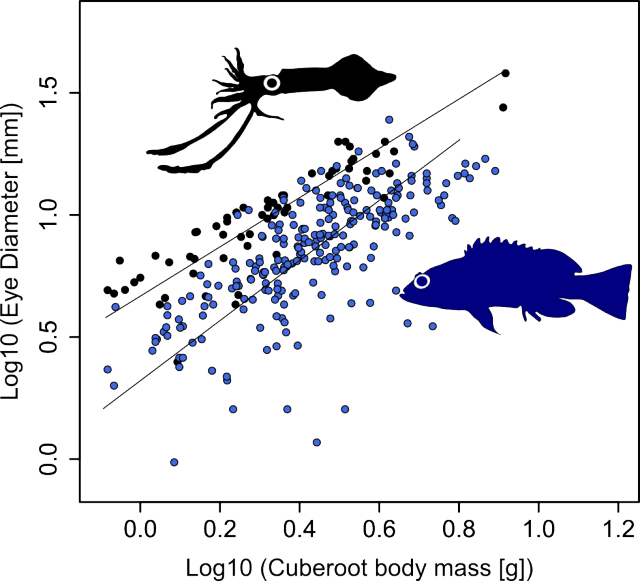 The authors go a step further and reexamine the original eye model proposed last year.  Schmitz and colleagues used more accurate parameter estimates including a range of eye sizes of giant squids. They found that over similar distances that point and diffuse light sources could be detected equally well.  To restate, a giant squid can just as easily detect the diffuse light of large object like a sperm whale triggering tons of bioluminescent plankton as a small fish using bioluminescence.  It’s just as likely a squid uses its large eyes to hunt others as it is to prevent be hunted itself. At an eye diameter of 15 centimeters this distance is 80 meters (262 feet) and at 4 centimeters the distance is 50 meters (160 feet), roughly 2/3 and 1/2 the length of football field. So larger pupils are equally great at detecting small point flashes, large form illumination, and even large dark objects.

4 Replies to “Why the giant squid eye?”