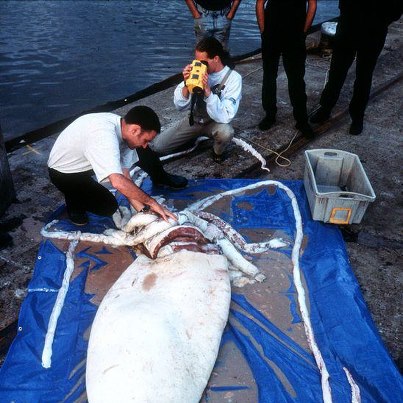 As I mentioned before, in 1857 Japetus Steenstrup, a Danish biologist scientifically named several squids and octopods in the shortly titled Hectoctyldannelsen hos Octopodslaegterne Argonauta og Tremoctopus, oplyst ved Iagttagelse af lignende Dannelser hos Blacksprutterne i Almindelighed. Among those species Steenstrup named was the Giant Squid or Architeuthis dux. The scientific name comes from the Latin archi- or Greek arkhi- meaning chief or most important, the Greek word teuthis for squid; and the Latin dux meaning leader.  So literally the name Architeuthis dux translates to “most important squid leader”.  That is scientifically an awesome name.

Since 1857, everyone wanted to name a new giant squid species. And who wouldn’t because they are awesome? Thus to date 20 species of giant squid are named.  But quite frankly not everyone buys into this gaggle of giant squid.   Nesis in the 1980’s suggested that only three valid species exist, Architeuthis dux in the North Atlantic Ocean,Architeuthis martensi in the North Pacific, and Arciteuthis sanctipauli in the Southern Ocean. Of course, no one knows for sure.  The key would be in the genes.

Because Ed Yong is magical and important and knows about Giant Squid papers before I do, he beat me to the punch on reporting about the new Giant Squid genetic paper.

Now, a team of scientists from eight countries, led by Inger Winkelmannfrom the University of Copenhagen, has tried to settle the debate by looking at the kraken’s genes. Together, they amassed tissue samples from 43 giant squids caught all over the animal’s range, from Florida to South Africa to New Zealand. They sequenced each sample to piece together its mitochondrial genome—a small secondary set of DNA, which sits outside the main genome in tiny bean-shaped batteries.

The team found that the giant squid’s genetic diversity is incredibly low. Even though the individuals hailed from opposite corners of the world, they differed at less than 1 in every 100 DNA letters. For comparison, that’s 44 times less diverse than the Humboldt squid, which only lives in the eastern Pacific. In fact, the giant squid seems to be genetically narrower than any other sea-going species that scientists have tested, with the sole exception of the basking shark.

First this is the research project I dreamed of conducting.  Secondly the results are even more interesting than I would have imagined.  The finding of just one species is not unexpected and finally provides the missing molecular evidence so sorely missing.  What is amazing is the total lack of genetic structure among ocean basins. I know of few animals that have the long range dispersal ability or behavior to ensure genetic exchange over such great distances.  More interestingly is that the genetic variation is even astonishingly low.

Why so low? Well there a multiple theories but one contender is that the population of Giant Squids was very low at some point the past.  This caused much of the genetic variation to be lost and thus Giant Squids slipped through a genetic bottle neck of sorts. Of course mitochondrial genome can be known to give odd results.  In this paper on polar bears, mitochondrial DNA gives a radically different conclusion than using DNA from the nucleus of the cell. (h/t to @joe_pickrell to pointing this argument and paper out)

But all that aside

I find it amazing that the largest invertebrate may also be a contender for the largest geographic range of a species.  Not even land can stop the giant squid. It is clear that there is much that remains a enigma about these ocean giants including the evolutionary history and biology that could achieve such a feat.

One Reply to “23 Species Giant Squid or Just 1”