There is an ancient nautical proverb commonly passed down from generation to generation amongst members of the diving community. I do believe it goes a little something like this…

(I would actually even add a third category to this little diddy for people, like myself, who shamelessly enjoy peeing in their wetsuits. Don’t judge me.)

All embarrassing tendencies aside however, what is it about descending into the briny blue that consistently has one wishing they had hit the head before leaving the poop deck?

The fact of the bladder is this…that urge to visit the salty water-loo, a phenomenon known as immersion diuresis, stems from two rather inconvenient challenges that come with visiting the underwater world. Pressure and temperature.

Challenge #1: Under Pressure (Doo doo doo do do doo do)

Normally, your body is accustomed to atmospheric pressure at approximately 14.7 pounds per square inch (@sea level). However when you are diving, hydrostatic or water pressure is significantly greater, increases drastically with depth, and comes at you from all angles….yes she said it.

Even if you don’t scuba dive, if you have ever dove to the bottom of a decently sized pool you have most likely felt the effects of this pressure. That nagging need to “pop” or equalize your ears before reaching deeper depths comes from the pressure difference between your inner ear and the water pressing on your eardrum.

So what’s a body got to do to deal with the weight of the watery world on it’s shoulders? 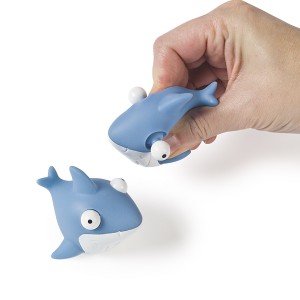 Not only does this increased compression influence the air spaces in your body (i.e. your lungs, your ears, your sinuses, etc.), but it also interacts with your cardio vascular system. The hydrostatic pressure on your body reduces circulation in your extremities and since you have a relatively finite volume of blood at any one point in time, the greater part of your blood starts to collect in your core. This process is somewhat akin to that of those squishy toys with the eyes that pop out when you squeeze them. Except when water tries to squish you, all your inner juices simply go to the important part of your body. (Though it would be cool if your eyes popped out too…more cool for me, not so much for you.) Pressure, however, isn’t the only thing that causes this circulatory displacement.

This past week, diving off the coast of San Diego, I hit a record personal low.

Just to put into perspective how I felt about this…(Warning: NSWF)

Beyond the explicatives that ensue from jumping into frigid water, numbing of the arms and legs is also a common occurrence. This loss of feeling is a result of your body trying to keep all your important bits and pieces warm by shunting blood from your outer limbs to your core in a process known as vasoconstriction.

So what does all of this have to do with your underwater potty dance?! Well, whether by pressure or by temperature, both of these situations leave you rather full around the mid-region. All of the blood that has been

translocated to your core is essentially psyching your body into thinking it has too much fluid. Normally, bodies don’t like anything out of the ordinary so they have regulatory mechanisms in place to compensate.

In this instance, the mechanism is known as the Henry-Gauer reflex after the two scientists who first described it. When the body’s blood volume is shifted into the core this puts pressure in these regions and in the atrium of the heart. Here, receptors are triggered by the resultant stretching of pressured areas.  A signal is then transmitted from the heart to the hypothalamus saying, “Warning…tank is full. Stop vasopressin production!” Vasopressin is a nifty little antidiuretic hormone (ADH) whose primary job is to retain water in the body. Once production of the hormone has come to a stand still…cue flood gates and warm golden happiness.

So next time when nature calls and you’re underwater…just own it…everyone does it.

With all your seals broken and minds blown, I leave you with this. In true DSN fashion, the shanty that inspired my inquiry into this subject. Much appreciation to the pee filled safety stops of Katie Sievers and Sarah Wheeler that lead to this lyrical composition.

Drink a bottle. Fill your bladder.

Down the ladder and you’re ready to pee.

Your personal heater under the sea.