When he made his historic solo dive into the Mariana Trench last month, James Cameron brought back images and descriptions of a “lunar like” marine landscape nearly devoid of life.-via National Geographic

Returning from humankind’s first solo dive to the deepest spot in the ocean, filmmaker James Cameron said he saw no obvious signs of life that might inspire creatures in his next “Avatar” movie but was awestruck by the “complete isolation.” –via Christian Science Monitor

The quotes above illustrate just two of the many mainstream media pieces that highlighted James Cameron’s comment of a lifeless landscape at the bottom of the Marianas Trench.  However, Cameron fell into a trap nearly 200 years old.

Edward Forbes is the whipping boy of deep-sea biology.  Forbes’s big mistake was concluding, in the mid-1800s, that marine life could not exist deeper than 550 meters, what he called the “azoic hypothesis.” Given the state of knowledge at the time, it seemed logical that no species could survive under the extremes of high pressure, lack of light, and cold temperatures characterizing the deepest ocean. Unsurprisingly, Forbes’s thinking spread quickly among the scientific community. The azoic hypothesis ultimately proved wrong or this blog would have a lot less fodder for writing and a different title.  How Forbes was wrong is the interesting part.

Forbes based is azoic hypothesis on sampling he did in the eastern Mediterranean Sea, an area that sees little phytoplankton production.  With less food at the ocean’s surface, less food will sink to the deep ocean floor resulting in little abyssal life.  Unsurprisingly, when Forbes pulled his trawled samples from the deep they were not brimming with a cornucopia of life.

Forbes also didn’t know that the low food arriving to the deep sea miniaturized animals.  In one of the earliest papers on the deep-sea fauna, Mosely (1880) noted, “Some animals appear to be dwarfed by deep-sea conditions.” Almost a century later, Hessler (1974) noted that “individuals of certain taxa are routinely so small that they are of meiofaunal size.” Thiel (1975) echoes these comments by noting the deep sea is a “small organism habitat.”

Consider that the entire collection of deep-sea gastropods from the western North Atlantic collected under the WHOI’s Benthic Sampling Program (44 samples, 20,561 individuals) would fit completely inside a single Busycon carica, a typical-sized New England knobbed whelk.  Forbes nets with their big mesh size allowed most animals to pass right through.  Today of course we use finer mesh sizes on nets or cores so we don’t miss the diversity of small life.

I cannot help but wonder if Cameron fell into the same trap that Forbes did so long ago, an underappreciation of the complexity and uniqueness of deep-sea life.

Was he waiting for charismatic megafauna that never arrived and potentially never existed at the deepest point in the ocean?

… there is no substitute for good science. Big budgets and lots of publicity gather public attention – a stunt such as a solo dive to the deepest part of the ocean will get an explorer into the history books, just as a free fall from the edge of space did.  But these are often one-off events. The whole point of the exercise was to get there. Science, on the other hand, is a systematic, step-by-step process that explores carefully, building on past successes and putting new discoveries into the broader context of the scientific community. A robot sub being hauled out of the water may not look as dramatic as the scene of a hatch opening and the triumphant explorer emerging to a cheering crowd, but what the science actually reveals is the most dramatic of all

Of course, I would be remiss not to mention another point glossed over and even blatantly misrepresented in the media.  Cameron’s dive, while worthy of praise on many fronts, is a not the first exploration of the deepest part of the ocean.  Scientists, especially Japanese researchers, have been sampling the bottom of the trench extensively for a few decades with robots and landers.

As McDonald points out, and the labor of many expeditions and scientists has demonstrated, the Marianas Trench is actually full of life.  Although contrary to what McDonald claims new research didn’t reveal this fact but only supports what we’ve known for a while.

Naysayers will surely point out how bacteria somehow don’t count as real life.  They live everywhere. These people have some size threshold for life to count. I give you naysayers protists!  Foraminifera, amoeboid protists vital for nutrient cycling in the oceans, also exist at the greatest depths of the Marianas Trench.  Perhaps some will need something even larger…a metazoan.

Multicellular life is also known from the Marianas Trench.  From even the earliest explorations the large crustacean, the amphipod Hirondellea gigas, was observed.  Scientists have even isolated bacteria from its body.  Indeed, larger organisms have been found at the bottom of several trenches (see photo below).  A specimen of sea anemone of the genus Galatheanthemum, a worm from the genus Macellicephaloides, an isopod crustacean of the genus Macrostylis, and a sea cucumber Myriotrochus bruuni are all known from the deepest trench on earth and reported back in the 1970’s by Torbin Wolff (of Haka fame). 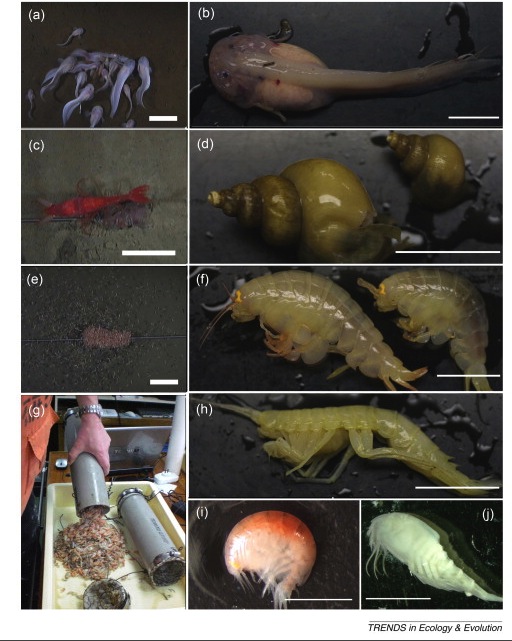 Cameron stated after his dive the necessity of returning to the deepest point in the ocean, the Challenger Deep, once again to explore.  I could not agree more. Our understanding of this trench, like much of the deep, is rudimentary.  We only have a partial glimpse of the life that existing there. However, we do know that it is not a lifeless void.  A wealth of life exists at Marianas Trench. You just have to know how to loo for it.

3 Replies to “Is Marianas Trench A Lifeless Void?”