Will Smith – Miami by GuenZou
Mark it on you calendars October 11-13th IT WILL BE OWN in Miami.  Interested in the intersection of the ocean ecosystem and the digital online landscape?  Then you need to attend!!

A great team is assembled to pull this bad boy off including David Shiffman, aka Mr. Shark.  This man may care more about this conference than sharks and if that is only half true then this is going to be THE conference to attend.

This conference is already shaping into being something spectacular.  The  conference is in an unconference format that allows participants to set the agenda.  Interested in seeing a specific topic at the meeting? Head over to the planning wiki and suggest something you want to lead or simply want to participate in.

We are really looking to draw in some new people into the same old community and to highlight innovative examples of combining the oceans and online spheres.

Who can attend? Anyone! Any interested scientist, journalist, student, blogger, communicator, activist, or member of the public is welcome. Due to logistical limits, we will have to cap total attendance at 200, including organizers, presenters, and attendees.

If you thought the the Deep-Sea News Suite Party at ScienceOnline is legend imagine what it going to be at whole conference of marine online folks!

You can keep up with the new by following @ScioOceans on Twitter, the hashtag #ScioOceans, the planning wiki, or the Facebook page. 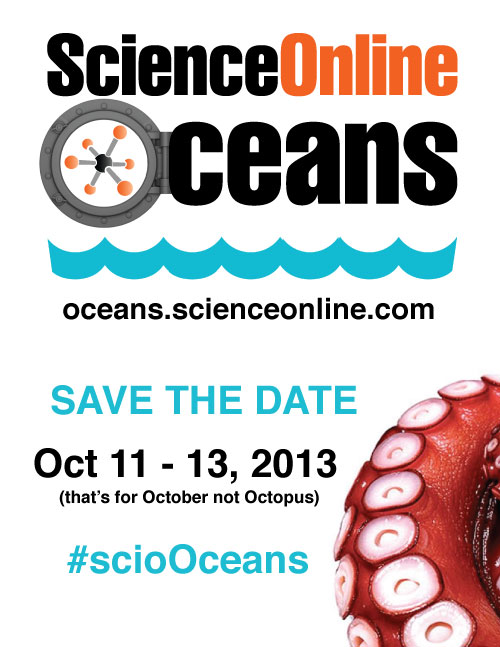