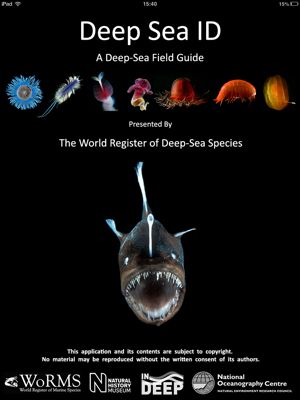 Today sees the launch of Deep Sea ID, a free app that allows offline access to the World Register of Deep-Sea Species and currently stores on your device the taxonomic information for over 20,000 deep-sea species, over 350 high-resolution photographs of deep-sea specimens as well as links to online taxonomic tools, sources and important references.

A lot of deep-sea biology (and marine science in general) uses video and image data, usually obtained through ROVs, HOVs and other camera systems. The data is often logged in real time and it is amazing to see an annotation pro or sagely professor in action, with their encyclopaedic knowledge of deep-sea taxa, calling out names as they flash up on the monitors.

Not everyone is gifted with such powers of memory recall. I work mostly with invertebrates, so when I see a big backboned animal winding it’s way past the camera, I am sorry to say it often gets logged as “fish”. I don’t have the knowledge to reliably say any more than that. I may well know the common name, but what about the Latin? Even if I do have an inkling of the family, what are the chances that I can spell it? If there’s an expert on board they can usually help but what if there isn’t? I’m sure that we’ve all been in similar situations.

The new Deep Sea ID app aims to help people like me and other scientists at sea or in the lab. It brings the awesome wealth of information held on the World Register of Marine Species database together with high quality images into a handy deep-sea guide. It isn’t a taxonomic key and you probably won’t be able to identify an organism down to species, but it can point you in the direction of the best resources for doing that job, with our ID Resources field on the taxon pages.

It is also a powerful outreach tool that I trialled last week at the UK’s largest science fair for kids. I was able to walk around and share a slide-show of deep-sea animals and microbes at the touch of a button (the little camera icon at the bottom of the screen) and the response was fantastic. Give it a try!

Deep Sea ID is a tool developed by deep-sea scientists for the deep-sea community. We are very grateful to all of the scientists and photographers who contributed images, data and expert knowledge. This is just the first step and we would welcome your corrections and contributions of images for future updates. Please get in touch via the World Register of Deep-Sea Species, where you can also learn more about how we constructed the database and where data the data came from.

* The app has been developed as part of the INDEEP Working Group 1 on Taxonomy and Evolution, with financial support from INDEEP.