Mariners have a long-standing tradition of naming their vessels after the ladies. However, when it comes to research vessels this has not been the case…until now.

For the first time, a research ship will be named after a woman. The Navy’s next ocean-class auxiliary general oceanographic research (AGOR) will be named after Sally Ride, the first female American astronaut in space. She truly was a queen of science. After multiple missons to space, she followed it up with a distinguished career which included being a physics professor at UCSD, director of the California Space Institute, writer of children’s science books, and a co-founder of Sally Ride Science. 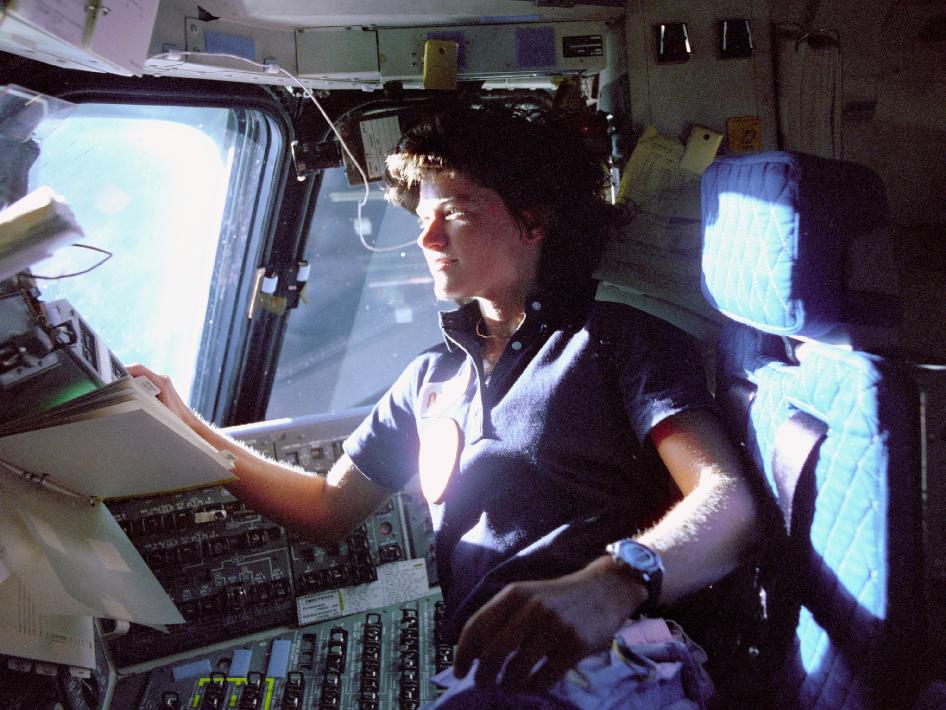 Sally Ride. Clearly she is mesmerized by earth’s ocean eddies from space.

When I first read the new vessel was going to be named after Dr. Ride, I was stoked. But I was also surprised that this was the first U.S. research ship to be named after a woman. Taking a peek at the University-National Oceanographic Laboratory System (UNOLS) fleet, the organization that coordinates the US Academic and National Laboratory Maritime Fleet, we find that boats are named after capes, towns, birds, fish, copepods, and of course, famous male Oceanographers*.

If you break down the research vessel names by gender, you find that 41% are named after males, 55% have a gender neutral name** and 4% have a female name.*** From the list of all US research ships, only 13 out of 248 ships or 5% are named after women.  It’s pretty clear the academic research ship community has chosen not to follow the tradition of naming its ships after women.

According to the department of defense press release, “Traditionally, AGORs are named for nationally recognized names in exploration and science.” So why no women until now? You could argue that historically, there were fewer women in science and important leadership positions. It could be that there are too few ships and too many important male names that haven’t been recognized either. These could be factors, but I will also argue that the lack of ships named after females is symptomatic of women’s unrecognized contributions to science and a subtle, if not necessarily intentional, gender bias. And let’s not get me started on the fact that all these dudes with ships named after them are old and white…

The lack of recognition for women scientists also bleeds over into other areas of science as well. For example, here is the gender breakdown of the winners of prestigious physical oceanography awards ****.

Out of 119 Awards/Medals given out, only 6 were to women. And there are many other ways that the achievements of non-white-male scientists are being overlooked. Look at the gender distributions of senior tenured professors, scientific funding, talks at conferences, and wikipedia biographies.

How do we change the gender and color of science achievement? Nominate to gain visibility. This could be as big as submitting an application for one of the prizes above, or merely an invitation to give a departmental talk. Spend some time and examine the achievements of your scientific cohort and make a short but intentionally diverse mental list of people that have made new, exciting and/or important contributions. This way you can always bring a new and diverse name to the nomination table.

So back to the lady ships of the sea. Which female scientist would you name a research ship after? Because it really is time for an R/V Lubchenco, McNutt, Earle or Tharpe .

* The ship names listed here were pulled from the UNOLS site and the websites of academic institutions. This list is not an complete list of academic research ships in the US. If you know of others, feel free to note it in the comments!

**Some of the neutral entries such as Calanus and Cape Henlopen are derived from male names, but it’s unclear whether the vessels are specifically named after males rather than things named after males.

***There is one other ship with a female name, the R/V Urraca. It is a women’s name in spanish and also means magpie. Whether it was specifically named after a woman is unclear, but I put it in the female category anyway.

**** Several of these awards are not strictly for physical oceanographers. See links for full-descriptions.

3 Replies to “The only lady of the academic seas”