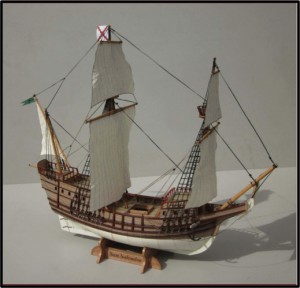 Ever dreamed of owning your own ship? Sail the seven seas? Pillage? Adventure? Explore strange new worlds, seek out new life and new civilizations, boldly go where no one has gone…oh wait…not that ship…but same idea.

If commanding your very own seafaring vessel is on your bucket list, look no further. Thanks to the Maritime Museum of San Diego, you can print, build, and captain your own! To be honest, when I first saw this, I thought it was just a small origami dingy. Not even close. This is a legit replica of  a 16th century Spanish galleon. Well…a lil’ mini one at least.

The museum has provided two downloadable models, Padawan Learner Version and Jedi Master Version, depending on your  mad crafting skills.

Beyond a mere arts and crafts project however, this stunning maritime miniature sails to us straight out of the history books. In 1542, Juan Rodriquez Cabrillo  was the first to explore the coast I love the most in the much bigger version, his flagship the San Salvador. Equipped with a rowdy crew of 170 men and his 200 ton Spanish galleon, Cabrillo set out on a mission to obtain what all eager conquistadors wanted at the time…booty…lots and lots of booty…probably better known as gold and spices. Heck, even just a route to Asia to get the gold and spices would do.

Though he never found that coveted passage to the Silk Road, metaphorically speaking, he did strike gold. Departing from Puerto de Navida, Mexico, and traveling north, Cabrillo became the first European explorer to reach “The Golden State.” Unfortunately, he ended up kicking the bucket from gangrene, but not before he traveled up California, discovering San Diego, some of the Channel Islands, San Fran, and most of the coast along the way.

Now if having the desk-sized version of Cabrillo’s swaggin wagon does curb your maritime fancy, and you live in the So Cal area, you could just go help build the big one. I did. Nestled right along side her original port of call in San Diego Bay and with a team of master builders, volunteers, and experts in marine archaeology, historical archives,

and sailing, a replica of the San Salvador is underway to explore the California coast once again. Currently, two years in the making, I visited the build site the other day to check it out for myself. Not only did I get to help work on the ship, but I also learned so much from various exhibits on sailmaking, nautical warfare (see arrow extractors above), what it was like to be a crewman, and a little something about the native peoples of the Kumeyaay nation who Cabrillo met up with when he got here. I even managed to stake a claim. (Craig, Holly, Rick, Al, and Kim….I think I read in the fine print somewhere this means we get to take her out for a spin whenever we want.)

Estimated at one more year till completion, the San Salvador (outfitted with some modern day touches like two 300 horsepower engines), will be coming to a California city near you as she makes her maiden voyage up the coast. Once her West Coast touring days are over she will join the rest of the Maritime Museum’s fleet and make home port in San Diego Bay (right next to the Star of India for those in the know). However, I highly recommend visiting the build site. They are open at Spanish Landing everyday from 11 a.m.- 4 p.m. and for $5 you can help re-create a small piece of maritime history. I must give props to the museum, this is pretty rad. And even if you can’t make it over there, don’t forget you can just build your own. Or…you can build me one.

For further information on the Maritime Museum of San Diego and the San Salvador build, check out: www.sdmaritime.org

Specially thanks to the MMSD, the Cabrillo Historical Association, and the lovely docents who sat and answered my many, many questions.

One Reply to “Building Spanish Galleons 101”