COMPASS recently published a commentary in PLOS Biology on the journey from science outreach to meaningful engagement. This post attempts to synthesize a series of reactions, reflections, and personal experiences that followed with the hope to expand the conversation. Read the summary post here, or track the conversation by searching for #reachingoutsci 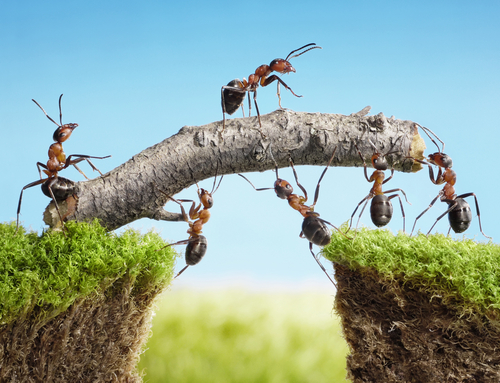 Image courtesy of Shutterstock. How do we bridge the gap efficiently?

Scientists are under increasing pressure to produce as many publications as possible in ‘‘high-impact’’ journals to raise their profile among peers and influence their discipline.

The statement greatly simplifies the complexity of the modern day academic scientist and the pressure we feel.  The demand on our time requires we first and foremost publish, both the number and the impact matter.  We must write and ultimately receive grants to both maintain our research (to produce more papers) and keep grant funds flowing though our departments and universities.  Depending on the institution, we may also be required to teach and mentor students, and potentially do it well, and provide service to the school in the form of committees.   Of course part of the investment in mentoring is to ultimately increase our own research output.  These are the direct demands on our time that directly influence our careers.  This is the formula for success in traditional faculty positions. As Simon Donner, a professor of geography, notes at his blog marbo, it is something faculty think about constantly. We worry if we can keep it up.

The formula for success for academia, while complex, rarely includes outreach. Image courtesy of Shutterstock.

in recent years, another measure of significance also has been on the rise—one that focuses on a scientist’s reach beyond their field and captures societal impact.

Within the last decade, an increasing pressure has risen to reach outward from academia to engage new audiences, including the ones that often fund our research through taxes.  Currently, the number of scientists connecting with public seams great, despite it not figuring into the formula for success.  Indeed this new demand on our time, largely from outside of academia, may and often conflicts with the formula.  At the end of day, after we have taught, collected data, wrote papers and grants, met with students, set through an hour long faculty meeting or two, managed a lab, we are now expected to fit outreach activities into our finite day.

And herein lies the interesting juxtapose, in which we could be successful scientists without outreach yet so many of us choose to do it anyway. In the 8-year life of Deep-Sea News, I estimated that I have dedicated 4,500 hours of my time—the equivalent of 2.25 years worth of 40-hour workweeks.  This lack of time is combined with the fear of they who monitor the formula and hold  “ultimate power over careers and [is] adamantly opposed to scientists spending time on outreach, rather than research.”

One, we believe that it is our duty.  As Jane Lubchenco, marine ecologist and former Under Secretary of Commerce for Oceans and Atmosphere and Administrator of the US National Oceanic and Atmospheric Administration, stated we have a social contract and responsibility to share our scientific findings with society for both a general increase in free knowledge but for direct application to societal problems.  And in something that dangerously approaches the scientific taboo of advocacy, yes we want to influence policy.  Ultimately, we do care about the world around us.  To draw upon Alan Townsend’s vision, we are part of society with our own toolkit to offer.  “How do we sustainably harness humanity’s extraordinary capacity for unity and positive change before things truly hit the fan?

Second, we believe that it may actually figure into the formula.  Through outreach we may indirectly, and hopefully directly, increase the impact of our publications, ensure greater grant opportunities and funding, attract the attention of promising students, and benefit our formal teaching.

For example, a link is commonly made between the number of Tweets about a paper has and a more traditional measure of impact, it’s citation count. First there are limited studies of this relationship incorporating too few disciplines and too few papers.  Even studies that examine this the correlations are weak and often do not account for other factors.  Last, even in the best cases we do not know the direction of causality.  They are still correlations.  Perhaps impactful papers are more likely to grab Tweet early and citations later with no relation between the two other than the paper itself?

So, to me, it seems we still have no idea of:

I’m not alone in this thinking, Donner also thinks we need to be more scientific about outreach.

We’re scientists, why not be scientific about outreach. Be systematic. Do research on the role of scientists in society. Evaluate different methods and assumptions. And when the time comes, be precise.

In a new PLoS Biology paper from Smith and colleagues trace the trajectory of outreach through COMPASS, a non-profit founded to bridge the gap between ocean scientists and the media. They begin to outline lessons learned from over a decade of work:

But the most important lesson is realizing that outreach, a one way monologue to the public, is dead.  COMPASS itself has moved away from “outreach (simply broadcasting a clear message) to meaningful, multi-directional engagement.”

I agree with most of these, but I believe more critical thought is required of number seven.  Are we simply operating on the deficit model when regard to scientists and outreach?  Zen Faulkes suggests, at least with reference to graduate student, more training may not be the answer or even that easy. Yet, “alternative” careers, non-tenured track faculty positions, are the normative now.  In 2006, only 15% of Ph.D.’s were found in these traditional positions.  Offering alternative skills sets to scientists will make them only more competitive in these alternative career paths.  However, I am concerned that those trained to do outreach well, will leave, as it provides a venue of escape from the formula.

I began outlining my ideas this post after I read the COMPASS paper but before I read the other fantastic commentaries on the paper and outreach in general. I am amazed how much these other scientists echoed my own ideas about the want, no the need, to do outreach but facing the wall of the formula. For example James Cloern begins his piece with “Like most research scientists I struggle with the challenge of how to allocate limited time. How much do we spend on research vs. other activities, and how much on each of the problems we want to tackle?”  All these posts also echo another and powerful idea, we are long past the time for a new formula. Chris Buddle has the new formula. But any new formula requires much better answers to outstanding questions regarding the role of scientists in outreach.

2 Replies to “Outreach, the academic formula, and the need for critical examination”