On June 20th I received an email: a huge pink blob has been found off the coast of Cuba, and no one can figure out what it is, any ideas? Emails like this make me feel pretty much like this:

They combine my two great loves: random biology facts and digging through the internet. Roughly 247 aquarium forums, journal articles and poorly-translated Japanese websites later, I had my answer. Ladies and gentlemen, I present to you the biggest mass of teensy eggs that I have ever seen: 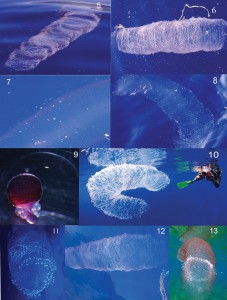 These masses can be up to 1.8 meters long (5’10”), and contain baby diamond-shaped squid (Thysanoteuthis rhombus), which hatch and proceed to peer deep into your soul with their cuteness:

Though much less heart-melting, adult squid are no less badass. Able to grow to the modest size of giant (1 meter in length and 30 kg), they troll the tropical and temperate waters of the world. Post squid-sexy-time, lady squids lay long egg masses. And thus our story unfolds: somewhere in the Atlantic a particular lady squid laid an egg mass. It bobbed through the ocean, ultimately bumping into a very alarmed group of Cubans, who in turn emailed someone who emailed some else who emailed the listserv that ultimately emailed me. The world is beautiful.