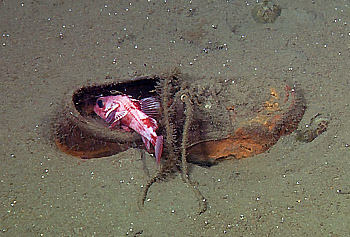 Out of sight out of mind is the typical culture with regard to the deep seas.  How can something so far away and so isolated be impacted by humans?  New work out of the Monterey Bay Aquarium Research Institute demonstrates the futility in such thinking.

The researchers focused on seafloor debris in and around Monterey Bay—an area in which MBARI conducts over 200 research dives a year. In this region alone, the researchers noted over 1,150 pieces of debris on the seafloor. The largest proportion of the debris—about one third of the total—consisted of objects made of plastic. Of these objects, more than half were plastic bags.  Metal objects were the second most common type of debris seen in this study. About two thirds of these objects were aluminum, steel, or tin cans. Other common debris included rope, fishing equipment, glass bottles, paper, and cloth items. The researchers found that trash was not randomly distributed on the seafloor. Instead, it collected on steep, rocky slopes, such as the edges of Monterey Canyon, as well as in a few spots in the canyon axis. The researchers speculate that debris accumulates where ocean currents flow past rocky outcrops or other obstacles….The researchers also discovered that debris was more common in the deeper parts of the canyon, below 2,000 meters (6,500 feet).

3 Replies to “Trash In The Deep Sea”