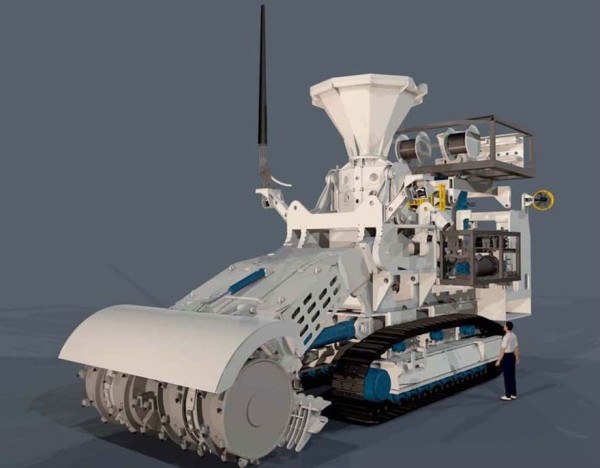 Perhaps it is easier to think deep-sea mining is something that will happen in the future.  Surely the cost and logistics of mining the ocean floor kilometers deep far outweigh the profit.  Think again.  Let this post be your wake up call.  Nautilus, that company that is going to delicately mine hydrothermal vents, is one step closer to have a bright new shiny 310 ton toy to pillage the deep.

Subsea vehicle designer and manufacturer SMD were awarded the contract to build the world’s first deep sea mining tools for Nautilus Minerals in 2007. The contract included three subsea mining machines with the associated control and launch and recovery systems.

Tuesday, 2nd July, saw the first major milestone in the production of the mining vehicles with the arrival of the chassis of the Bulk Cutter (BC) at SMD’s main production facility in Wallsend. The chassis, which was fabricated by Davy Markham in Sheffield, was delivered complete with double ended drive tracks which were manufactured by Caterpillar in Italy. The Bulk Cutter is the heaviest of the three vehicles, weighing 310 Tonnes when fully assembled; the chassis weighs 70 Tonnes.

Nautilus intends to use the vehicles at its first project, known as Solwara 1, off the coast of Papua New Guinea in approximately 1600m of water.

After another vehicle (the auxiliary cutter) plows a flat path over that pesky not flat seafloor, the Bulk Cutter, the power house, begins the excavation. It has a large excavating that drum that is driven by one megawatt of cutting power.  Keep in mind that’s enough power to light 600 homes.