In the last half-century, as the Earth continued to warm, the oceans absorbed 90% of the heat.  That remaining 10% melted sea and land ice and warmed our land and atmosphere.  Just 10% did that.  You can now thank the oceans for saving us from ourselves. Go ahead I’ll wait.

In 2000 something drastically changed. Ocean temperature at the sea surface stopped rising. The absorption of this thermal energy stalled while increasing greenhouse gases should increased warming.  Where did this missing energy go?

New research has found this missing energy in the deep oceans.  The findings rise from a model (ORAS4) tested against and based on temperature and salinity data from 1958-2009, at least a dozen different data types, and all over the worlds oceans.  This is massive undertaking and represents our best estimates of changes in the ocean’s heat, i.e. thermal energy, over the last half century.

OHC integrated from 0 to 300 m (grey), 700 m (blue), and total depth (violet) from ORAS4, as represented by its 5 ensemble members. The time series show monthly anomalies smoothed with a 12 month running mean, with respect to the 1958–1965 base period 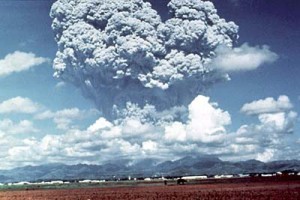 Ash cloud above Mt. Pinatubo.  If we could just have another of these, we would be set.

The figure above outlines clearly where the heat is going—the deep oceans.  The deepest oceans (purple line) have risen in heat content much greater than the oceans at 300 meters and less.  Indeed, this discrepancy in energy uptake by different ocean depths appears to have started in the beginning of this century.

The figure above also show some interesting cooling periods following major volcanic eruptions—Agung,El Chichón, and Pinatubo. The last eruption in June of 1991 was the second largest eruption in the last century.

The bad news is that the deep oceans, the very inspiration of this blog, are on a long-term trajectory to a boiling pot of water. On the upside we are all just one catastrophic volcanic event away from cool bliss.