A year ago, I jumped off the side of a perfectly good boat. Infinite water hides the land to the west and the ocean floor below. Moments ago, the captain and Mexican marine biologist, Rafa tells me to get ready. I scramble to gather and put on my mask, fins, and snorkel. Through my fogged mask and the glaring sun I can’t see anything below the surface, but Rafa perched high on the deck above knows what to look for. He cuts the engines and we coast up to the target. Rafa shouts “Now!” I spring over the side of the boat. At first I don’t see anything except the bubbles from my water entry. The bubbles begin to clear and see nothing except blue. I swing around. Mere feet from me a mouth, as wide as I am long, quickly approaches. Following that mouth is 25 feet of whale shark. Al briefed me on whale sharks just that morning. “The esophagus of a whale shark measures only inches across.” His words are echoing in my head. I also take solace in that whale sharks prefer planktonic not human flesh.

Even if most sharks preferred man meat, most just do not measure up. Fifty percent of the sharks in the ocean are less than 3 feet in length. Seventy five percent are less than 5 feet. That is maximum length. In other words the maximum length an individual of given species has ever obtained. In the oceans, where life is tough most sharks will never reached this ideal size. It’s like saying all humans are the size of Andre the Giant. Most of us and most sharks are not giants. Of all the size classes, the greatest shark diversity occurs at less than one foot in length. 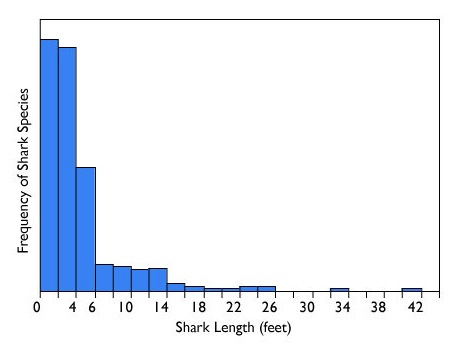 The smallest shark is the dwarf lanternshark (Etmopterus perryi) is a rare animal from the deep waters of Columbia and Venezuela. The largest known individual, ever, reached only 8.3 inches. Not feet. Inches. This is just barely longer than a pencil.  What is lacks in size it makes up for in flashiness. Like its name suggests, the dwarf laternshark can generate light through an array of photophores that line its body.

Another close contender for the smallest shark is the enigmatic Campeche catshark (Parmaturus campechiensis). The species is only known from one individual held now in the Smithsonian. In other words, we have only seen one…once. Like the dwarf lanternshark, the species is known only from deep waters. The one individual measured just 6.3 inches. That’s only big for a phone.  Notably the individual was a juvenile and adults, if ever caught, may measure longer.

Another contender, and often wrongly assumed to be the smallest shark, is the spined pygmy shark (Squaliolus laticaudus). It is a giant among small sharks at whopping 11 inches. Like the other small sharks here it lives in deep water, lurking about typically at 1,600 feet.  However, it is by no means rare or geographically limited being found across the Atlantic, Pacific, and Indian Oceans.

Given the size of most sharks, of far greater concern is how many can fit into our mouths.