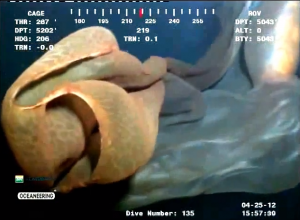 The moon jelly: with its eye-catching looks and mild sting it is a favorite among aquarists, a rising novelty pet, and often featured species on documentary series. The moon jelly is what many wish all jellies could be. But this classy, chic little number has a truly strange secret: its closest relative, the infamous “trash bag jelly” Deepstaria.

Until 2010 Moon had this secret tightly under wraps. No one knew the lurid details of its kin until Keith Bayah and others [1], intent on destroying all things beautiful with “the truth”, insisted on diving into this ordeal.  Using gene sequences to unravel the mystery of jelly relations, Keith and colleagues found that Deepstaria and Moon may in fact be “sister groups”, more closely related to each other than to any other type of jelly. Their tree is on the left, and with my highly technical clarification on the right: 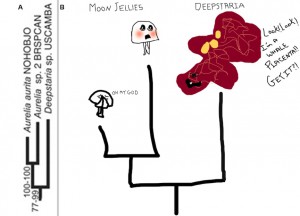 Approximately 87.3% of google search images for “whale placenta” are in fact Deepstaria. The other 12.7% are disgusting.

Don’t get me wrong. I love Deepstaria. When video of it memed the internet there were a solid 0.2 seconds where people actually asked me about jellyfish. But its relationship to the moon jelly is a pretty big shocker, at least if superficial appearances count for anything. But for jelly researchers, the relationship was clear even before gene sequencing, both the moon jelly and Deepstaria have a mesh-like digestive canal system, for example.