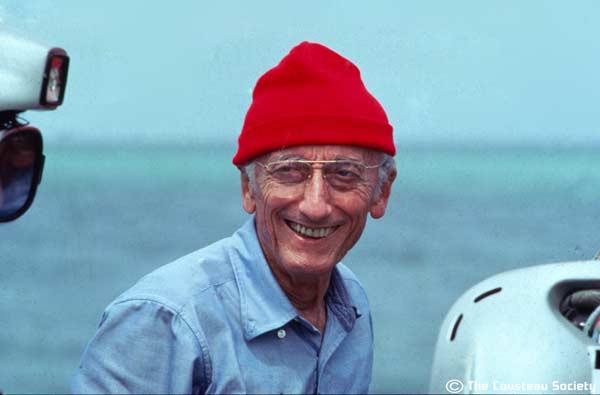 It goes without saying that many generations of Marine Biologists owe a bit of their inspiration and success to Big J. Either from his work developing early SCUBA technologies to his documentaries and television shows that brought the wonder of the ocean world in full color into our living room television sets. But Jacques was French, of course, so he had the drive to drink in the name of Science. In one episode, his crew found a case of bottled British ale in a sunken wreck, dating somewhere around the late 1700’s, that they drank with gusto. Beating that, his crew also found a cache of ancient Greek wine amphorae in another shipwreck dating to 230 BC, of which one was decanted and eagerly (and comically) consumed on deck, and deemed ‘not great, but drinkable’ (also one of the most common phrases I utter). In honor of his contributions to science, exploration and education, below are three actual Cousteau-themed Cocktails you can enjoy as you tip your red cap to him:

THE JACQUES COUSTEAU
1 1/2 oz. Apple Brandy or Applejack
1 oz. Grand Marnier
1/2 oz. Fresh Lemon Juice
Splash of Grenadine
Champagne or Sparkling Wine
1 Lemon Twist for Garnish
Pour everything, except the champagne into a shaker with ice. Shake well, then strain into a champagne flute or cocktail glass. Add about 1 1/2 oz. Champagne to top off. Take a twist of lemon and proceed to squeeze and twist above the cocktail. Rub the rim of the glass with it, then drop it in.

At the age of seven, I was lucky enough to visit the Oceanographic Museum in Monaco, where Jacques was the museum’s director for nearly thirty years. The main exhibition hall was a large Victorian-style cabinet of curiosities that included numerous whale skeletons, groupings of seashells, and sea creatures preserved in jars of ethyl alcohol and formaldehyde. But for some reason, the jar with the enormous all-seeing eyeball of the giant squid Architeuthis is what I remember most. I returned to France many years later as a post-graduate working at a paleontological site near the Mediterranean, where part of our meager pay was in a daily ration of two five-liter jugs of bad wine. But on especially hot days, we were treated to a thirst-quenching drink called The Monaco. But to order one in France would get you snickers as it is considered a kid’s drink. So upon my first visit to Monaco as a seven year-old, I could have legally ordered this cocktail:

THE MONACO
2/3 lager or light ale
1/3 fresh lemonade or lemon soda
1 oz. Grenadine
2 oz. Brandy (optional for adult-strength version)
Blend the ingredients into a chalice or other large beer glass, and can be served over ice if you prefer (not recommended). This is basically the French version of a Shandy, but addition of the Brandy can up the octane of the drink, and some recipes even call for Vodka in place of the Brandy. Addition of the Grenadine should make the drink the same color of the red toque atop Jacque Cousteau’s head.

In a secret pact, Irish millionaire and brewer Thomas Guinness bought an old British Navy WW II minesweeper that would be christened The Calypso. She would become Jacque’s portal to the world, a base of operations, a cinematic soundstage, and no doubt, the scene for many drunken nights with his dedicated but sometimes unruly team. Though she is now semi-permanently in dry dock, there are plans to have her restored and re-christened for a new era of high-seas adventure. Until then, cherish bold life with these two drinks: