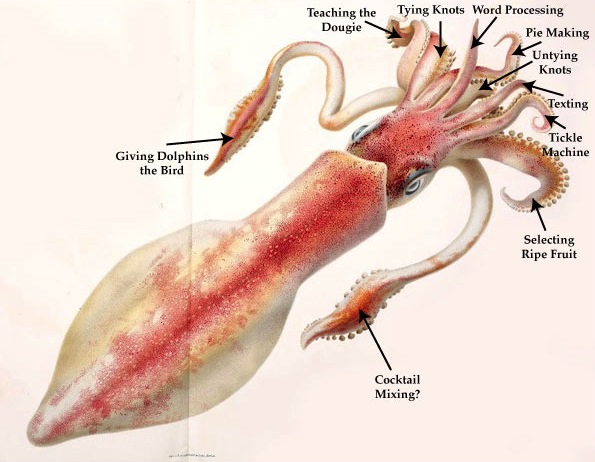 Much speculation occurs among biologists about the uses for all those arms and tentacles in squids.  Eight arms and two tentacles seem like appendage overkill.  I do fine with two arms. Well not me because I’m uncoordinated, but other humans I hear can achieve amazing feats with just two arms.  I have a running theory, developed over cocktails, about what all those squiddy limbs are for.  These are not thoroughly researched. Yet. Thankfully, crack teams of teuthologists spend countless evenings actually researching this question as opposed to in addition to just drinking cocktails and coming up with hypotheses.

Most squids possess two long tentacles that can quickly be extended and retracted.  The flattened end of the tentacle, called the club, is covered in suckers, hooks, or in the most awesome of squids, both.  The tentacles and their clubs are highly modified prey capturing machines.  For squids, clubbing means something entirely different.

Then there is Grimalditeuthis bonplandi. You think with being named after the Grimaldi family, the reigning house of Monaco, and the French scientist Aimé Bonpland that this squid would be much cooler.  Nope this squid is like the anti-squid, the gelatinous slow moving kin of the musculature fast moving squids.  The tentacles break easily because they are thin and puny.  These squid lack the musculature to quickly, or maybe even slowly, extend and retract the tentacles.  The tentacle clubs are devoid of both suckers and hooks.  They can’t don’t even light up the clubs with bioluminescence.

Yep, by all accounts Grimalditeuthis bonplandi is the least cool squid on the planet.

With such insipid tentacles how does this squid even capture prey? Grimalditeuthis bonplandi undulates and flaps the clubs…gently. These movements may cause other nearby animals to become agitated and bioluminescence.  Probably because Grimalditeuthis is so boring.  Or alternatively, the movements may mimic the vibrations of small prey or mates thereby attracting predators or mates close to the squid. That’s right Grimalditeuthis attracts other animals to it by acting like other, different animals.  Basically, these spiritless movements attract prey perhaps even duller than Grimalditeuthis.

However as the authors of the new study note, “When a predator exploits its resemblance to a non-threatening or inviting object or species to gain access to prey, it is referred to as aggressive mimicry. Luring is one form of aggressive mimicry…” So, the torpid Grimalditeuthis is a least aggressively luring.  Nope, that just makes its creepy.

5 Replies to “The Most Boring Squid on Earth?”