Sea squirts, aka tunicates, in shallow water are more like, “Hey look at me! Food is everywhere.  I’m just gonna sit her on my fat tunicate ass, play GTA5, and filter that yummy food out of the water.”

But shit is real in the deep sea. .  Players got a play different game. Don’t let the fact that Dicopia antirrhinum looks like a French meringue cookie fool you; this bad boy is a predator. Typical tunicates possess two siphons, an incurrent or oral siphon and an excurrent or atrial siphon.  In the deep-sea tunicate family Octacnemidae the oral siphon is enlarged and contains lobes.  These lobes work much like a Venus Fly Trap, closing to capture motile prey.  In D. antirrhinum, the oral siphon is greatly enlarged forming a big horizontal slit surrounded by two lips.

The atrial siphon is located on D. antirrhinum’s top.  Stare closely and long enough and you will see my favorite Hanna-Barbera cartoon character from the 80’s—a Snork.  Of course a big mouth is no good without some muscles to back it up.  And o’ do muscles flourish! Circular muscles surround the lips, longitudinal muscles run both along the top and bottom of the mouth, and set of oblique muscles link the corners of the lips right the digestive system. Tiny crustaceans are not leaving this tunicate trap.

Impressed yet? Well, consider that the name antirrhinum is homage to the genus of flowers Antirrhinum.  You know the flowers better as snap dragons so called because the flowers resemble the face of a dragon that opens and closes its mouth when laterally squeezed. 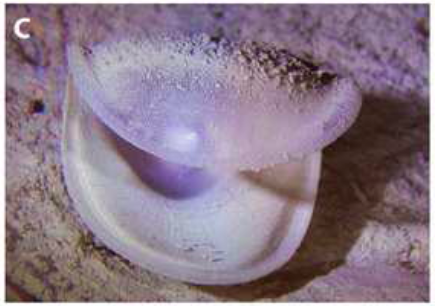 BONUS: In quality only USA and Hanna-Barbera in the 80’s could deliver here is the opening to the Snorks.