This guest post is brought to you by Sheanna Steingass.  Shea is a graduate student at Oregon State University’s Marine Mammal Institute studying the behavioral ecology of pinnipeds. She is also author of Oregonbeachcomber.com,  a marine debris blog focusing on the Pacific Northwest.

“Mermaids are real- I saw it on Animal Planet!”

No, you didn’t.  That ‘documentary’ was in fact a new generation of fictional media called a ‘mockumentary’, or as Animal Planet puts it, ‘docudrama.’  It’s like “This is Spinal Tap” for marine biology.  And they admit that. http://realscreen.com/2013/08/07/discovery-defends-shark-week-special/  However, people took the show so seriously that in order to deal with massive amounts of inquiries, NOAA had to issue an official statement that, to their knowledge, mermaids aren’t real.  http://oceanservice.noaa.gov/facts/mermaids.html

A critical look at the Animal Planet ‘docudrama’ reveals abominable (excuse the pun) CGI, combined with scripted interviews with actors. And who can blame them? People love mermaids, they delivered, and they made a ton of money. In fact, it worked so well that they produced another fictional (FICTIONAL!) docudrama, “Megalodon” for Shark Week.

Most scientists wouldn’t touch the subject of mermaids with a ten foot pole- I am going full contact.

1: They would freeze to death.  Quickly, and matter what ocean. Especially those skinny Ariel/Disney types. The truth is, the human-like body form is not made for surviving long periods in the water.  Check this out:

Sure, there are areas of the ocean that are above 70 degrees- on the SURFACE. Assuming mermaids would want to live out in the bottom of the open ocean, it is just too cold for them.  And, once you get down a few meters, water temperature drops dramatically.

The first option would to look like a marine mammals, whose thick blubber layers protect them from cold, dark waters.   What of smaller animals? The second option for thermoregulation is a thick coat of hair- such as that of Enhydra lutra¸ or the sea otter.  The sea otter has more than 900,000 hairs per square inch (Kuhn et al. 2010). The problem? Otters have to groom themselves often to keep their hair filled with air, and not with water (Fish et al. 2002).  Very inconvenient if you are an elusive denizen of the deep.

And those long slender arms? They would freeze off.   Marine mammals have fusiform bodies (reducing surface area-to- volume ratio) and short appendages that can withstand reduced bloodflow and heat.

So, essentially, you would end up with a very hairy or obese mermaid with stubby arms.

2: You can’t pick and choose…body parts Picture your typical mermaid- a graceful female with the scaled tail of a fish. Mammals are defined by being warm-blooded and having hair; fish do not.  An animal cannot have both human and fish-defining characteristics- it’s just all wrong, evolutionarily speaking.  The human line of evolution is fairly well-mapped.  Prior to the development of hominids, humans and fish are so far branching down the evolutionary tree that the first marsupial mammals appeared during the Jurassic period 173 million years ago (Kumar and Hedges 1998).

Additionally, the idea that somehow a human bred with a fish and produced viable, virile offspring is just ridiculous.   Which brings us to the next point…

3: They would go extinct.  How do mermaids reproduce?  They are human down to the waist, after all.   Well, there are two options for that.  First, they could do it human-style.  Which means that they’d have to get it on the mammalian way- with internal fertilization.  But what if you have fish parts down there?  Most fish reproduce externally- with females depositing eggs in the environment and males fertilizing them.

Could mermaids lay eggs? Think again!  The only mammals that produce eggs are the echidna and platypus- the monotremes of the class Mammalia.  And these guys don’t have any teeth, look nothing like a human, and really would make a poor excuse for a mermaid.

Oh, and don’t even get me started on sex ratio.  As far as I can tell, there are waaaay more mermaids than mermen.

4: They would be constipated. While we’re talking about plumbing, the fish and mammal digestive processes are so very different, they cannot jive.  Mammals digest food via complex digestive tracts, which produce solid waste and urine- a sterile byproduct composed mostly of water and waste, salts, and proteins.  Fish kidneys produce ammonia- which is expelled via their gills.  Yep, they essentially pee through their gills. (http://www.elmhurst.edu/~chm/vchembook/633ureacycle.html)

As for digesting food, where humans have well-developed large and small intestines, fish have one simple intestine.

So really, you can’t have an animal with a mammalian digestive tract and a fish-designed hind end.  Even more tellingly- can you point out the butt on a mermaid? Didn’t think so.

5: We have no physical evidence.  Really.  If the existence of such a creature were true, it would literally change the face of science- and why would it be covered up if it were a real animal?  That makes for a good plotline, but doesn’t make any logical sense- what global conspiracy would cover these things up? If mermaids existed, the scientific world would be studying them endlessly, and grant money would fall like rain during monsoon season. The world would know.

So there you have it- mermaids would be very cold, sterile, constipated, and probably extinct, which seems pretty miserable to me. So the next time you see something you think looks too good to be real, think again – because it probably is. 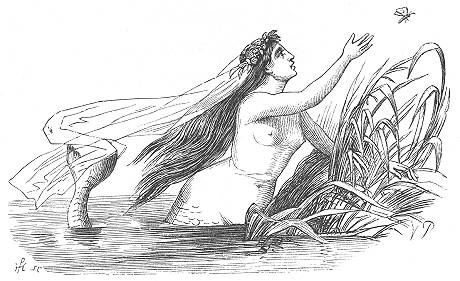