In humans concentrations of carbon dioxide around 1%, normal is just a less than 0.04%, can make a person drowsy. Like a macroeconomics class.  At 10% concentration, even with enough oxygen, carbon dioxide can result in dizziness, headaches, loss of hearing and sight, and unconsciousness. Much like a Grateful Dead concert. In the oceans, things work a little bit differently, but the end result is equally detrimental.  Increased carbon dioxide concentrations in the atmosphere lead to the acidification of the oceans.  Under future CO2 emissions, the pH of the oceans could decline a further 0.3–0.4 units. The oceans now are 0.1 units lower in pH and 30% more acidic than before the Industrial Revolution.  A more acidic ocean more readily dissolves shells and skeletons of marine organisms made of calcium carbonate.  Acidic oceans also change how animals react to the ocean around them—including hungry predators.

The Marbled Cone Snail the antagonist of our story

Gibberulus gibbosus, previously Strombus gibberulus gibbosus, goes by many common names but the most badass of these is the Tonga Fighting Conch.  You think with such an awesome name that this beast would have few enemies to contend with.  However, the sworn enemy of the Tonga Fighting Conch is the Marbled Cone, Conus marmoreus. This Dalmatian spotted wanna-be is nothing but a evolutionarily honed snail eating machine with a modified poisonous harpoon that can be ejected from its body to subdue any prey.  In the video below a Marbled Cone attacks a Common Periwinkle.  At 1:35 you can see the Cone actually inject poison into the doomed Periwinkle. This eventually causes paralysis in the Periwinkle that opens up their trap door, the operculum, allowing the Cone to feed.

So what does a Tonga Fighting Conch do when faced with a Marbled Cone?  Stay and fight? Nope, it get’s the hell out of dodge. These conch’s do this by jumping away with their power molluscy foot.  Watson and colleagues tested how Tonga Fighting Conch faired against Marbled Cones when was maid a little more acidic.  In the experiments, Watson and her team build a fighting arena in which the conch and cone were put into a face-to-face death stare.  To ensure no conchs were injured and the presence of hungry motivated predators, a thin plastic see through barrier was placed between the matched predator and prey. 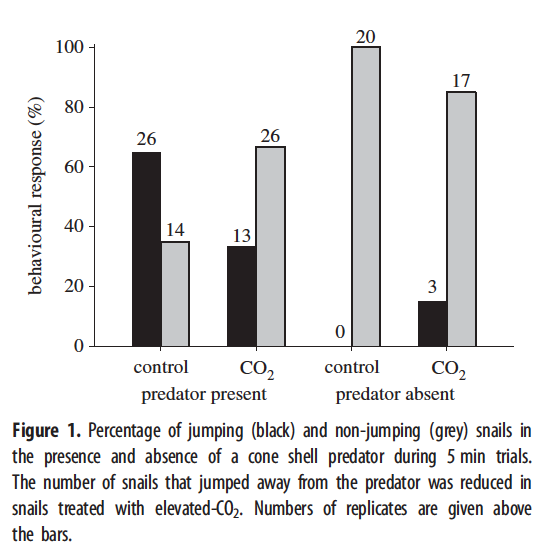 Under high CO2, overturned conchs were still able to right themselves as quickly and with the same number of foot flicks as their brethren in normal seawater.  This suggest that the physical ability to escape is not effected by high CO2. However, antipredator escape behavior did change.  In cage matches between cones and conchs, 65% of the conchs jumped away.  In high CO2 only 33% jumped.  Not only did less jump in high CO2, conchs took on average nearly 30 seconds longer to jump away. These high CO2 conchs also jumped in trajectories that kept them close to the predators.  In normal conditions, conchs angled away from the predator. 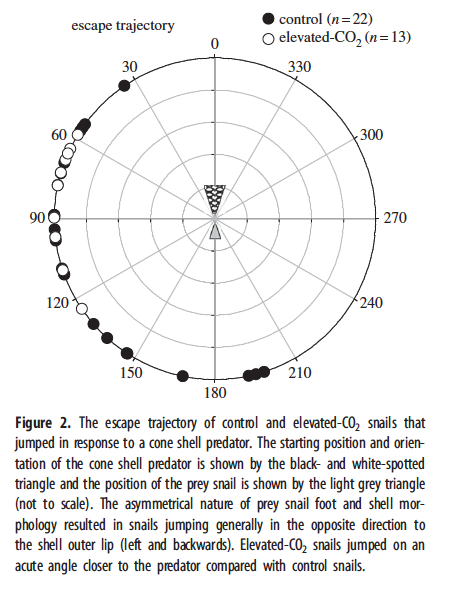 The researchers were able to restore the Tonga Fighting Conchs under high CO2 with a shot of Gabazine.  Acidic conditions change ion gradients within organism causing neurotransmitter receptors to malfunction.  The inappropriate firing of one type of neurotransmitter receptors (GABAA receptors) is affected by these ion gradients and cause odd behavioral response.  Gabazine blocks this the GABAA receptors and prevents this behavioral response.  Tonga Fighting Conchs in high CO2 and Gabazine performed normally when faced with the Marble Cone.

3 Replies to “Snails High On Acid Make Poor Choices, Get Eaten By Predators”