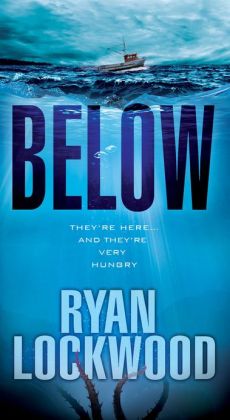 Recently, author Ryan Lockwood sent me a copy of his new book Below. This fictional piece follows the story of professional diver Will Sturman and marine biologist Valerie Martell as they battle unknown monsters from the deep.

You had me at unknown monsters from the deep.

What to say about this book?  I loved Jaws but it always seemed to be missing a key ingredient–Cephalopods.  Lockwood’s book gave me exactly what I needed.  “I have a fever and the only cure is more cephalopod.” Scratch the sharks Jaws and add in big ass squids.  To borrow and modify the glorious words of Samuel Jackson in his consummate role of Snakes on Plane…well you get the point. I like squid and there is a squadron of squid in Below, literally thousands of antagonists. Moreover, Below contains fantastic scenes written entirely from the squids point of view.

Where Lockwood really excels though is totally nailing the science.  By the way, this is the highest compliment a scientist can give.  Several sections on all the science of squid are both accurate and seamlessly built into the suspenseful plot.  I reread the book to just looking for errors in the science. The small insignificant errors I found reflect more me being a tough audience and Lockwood taking necessary artistic license.

The plot is on the edge of your seat suspense that pulls you all the way threw to the dramatic end.  The book took me literally two and half-hour flight to finish. The climax is a visceral and unnerving ride that includes both of the sufficiently flawed to be likeable protagonists.

As the holidays are coming, you will need something that allows you to ignore all that agonizing family time.  Ryan Lockwood’s Below is just the cure.

Overall, I give Below 9/10 pirate squids.

2 Replies to “Unknown monsters from the deep”