When you are kicking it at the sushi bar, nommin’ down on that sustainably caught spicy tuna hand roll, do you ever stop and imagine what it would be like if it wasn’t neatly contained in it’s glorious seaweed wrapping?!?

Rice, fish, soy sauce, those little mini carrots….they would be all over your hands, probably your plate, maybe even a bit on your shirt. Not an enjoyable experience at all.

However, like most great things in life, you can thank a scientist for saving you from your messy self.

The red seaweed Porphyra, more commonly known in your sushi roll as Nori, represents one of the most valuable aquaculture crops in the world. This abundance has led to an annual production equating to an estimated $1.3 billion U.S. dollars (that’s a whole lot of yen). However, things haven’t always been this way.

Cultivation of this cash “sea” cow by the Chinese, Japanese, and Korean peoples started way back in the A.D.’s. They would collect the leafy bits that we all know and love (a.k.a. the gametophyte stage) from the intertidal zone where it thrived.  They were even able to farm Porphyra by letting it’s conchosphores (that’s fancy for baby algae) settle on ropes and bamboo. However, not much was really know about the life cycle of Porphyra at this time, or why it’s natural annual production was so variable. Hint: Variation in production is a no go when demand was increasingly growing for what has now become a culinary staple in many of these countries.

Cue scientist saving the day. (Oh and might I add she was a lady scientist! Double Win!)

It wasn’t till 1949 that British phycologist, Dr. Kathleen Drew-Baker discovered the missing link. You see, Porphyra is a funny little seaweed in that it has what is known as a heteromorphic alteration of generations, meaning that one part of it’s life cycle looks completely different than the other. This difference in appearance was so drastic, that we thought the two life stages were completely different species!! Yet, Dr. Drew-Baker (being the awesome phycologist and lady scientist that she was) was able to put the two together and realized that what we previously thought to be Conchocelis rosea was just the other Porphyra life stage in disguise. Sneaky. Sneaky.

This big tidbit of information completely changed the way in which Porphyra was farmed and blew the seaweed business wide open to become the lucrative industry it is today. In fact, this knowledge was so crucial to the Japanese that they built a monument to Dr. Kathleen Drew-Baker inside the Sumiyoshi Shrine in Kumamoto, Japan. They even celebrate the Drew Festival on April 14th (her birthday) to pay reverence to the “Mother of the Sea.”

So next time you hit up the sushi bar make sure you also pay your respects. One sake for Dr. Drew-Baker. One sake for you. Two sake for… well you get the idea. 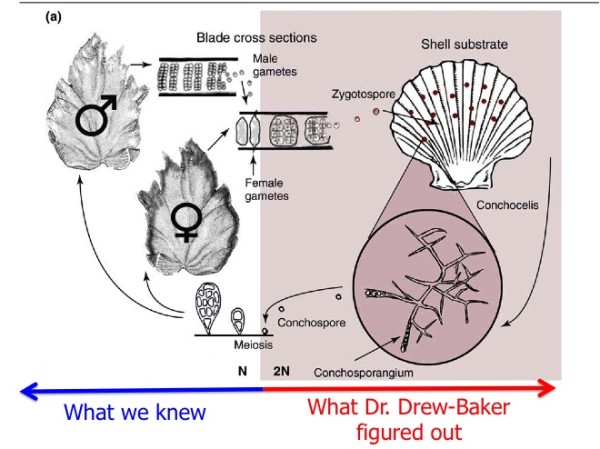 8 Replies to “Weed of the Week: The Phycologist that Launched a Billion Dollar Industry”