Females of some species in the wild may not be able to prevent unwanted sex with males. In many crustaceans, males forcibly mate with females who often receive sperm from multiple males. In other cases, females will not reject the male simply because doing so would waste precious energy reserves. When males harass female mosquito fish the efficiency with which the female finds food and consumes it decreases by half. But in both of scenarios the female may still get the last choice in who sires her offspring by make a cryptic choice. Female cryptic choice occurs when a female rids herself of a male’s sperm without his knowledge. Sneaky and effective. 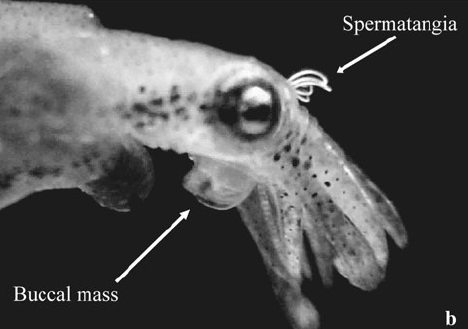 In the Japanese pygmy squid, Idiosepius paradoxus, mating includes neither a pleasant courtship nor aggressive behavior. Males copulate freely with females. Pygmy squid males will dart toward a female, grasp hold of her, and attach a capsule (the spermatangia) contain sperm to the base of her arms. However, females will often remove the spermatangia. Females will stretch out their buccal mass (mouth and pharynx) to search for the spermatangia at the base of the arms. Once picking up these spermatangia with their beaks, females with either eat them or blowing them away from water from the funnel. 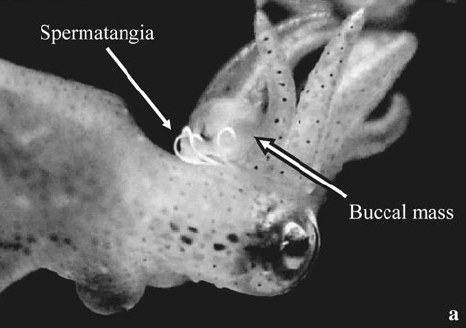 So when does a pygmy squid female choose to keep or discard spermatangia? In a recent study, Sata et al. found the elongation of the buccal mass of females post copulation was predicted by the length of the male partner and the duration of the copulation. Males who were longer than 8-9mm or lasted longer than 3 seconds faired poorer than their shorter, in every possible way, male competition. Why small males and quickies? Both of these may be a evolutionary result decrease risk from predators. Shorter pygmy squid males may stay hidden more easily amongst seagrass. Likewise, mating can make squid pairs more conspicuous to predators and quickies would be favored or long tromps. 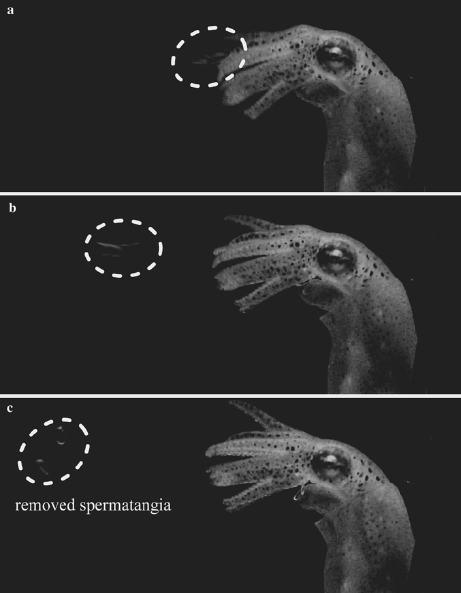 And because the females does this all post coitus, the males are none the wiser.