Squids not only swim, they also fly*.  In fourteen different published accounts dating back to 1892, squids have been caught in the act of taking to the air.  In one of the greatest examples of squid flying, the water in an aquarium was lowered to prevent Northern Shortfin Squid from airborne escapes.   In a recent study, Ron O’Dor and colleagues examine the physics and biology of cost and gains for suggest squids are actually molluscan rockets. 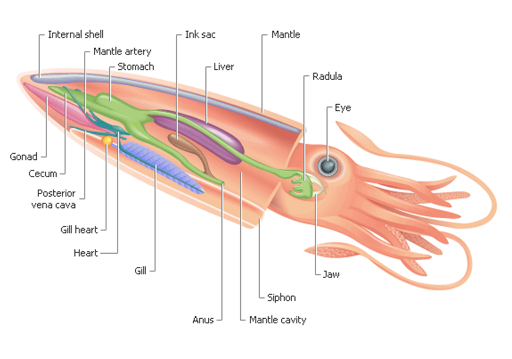 Squid attain some of their most dramatic speeds and accelerations during escape responses, known as escape jetting. This occurs by water jet propulsion.  The main body of the squid, referred to as the mantle, is highly muscular.  Indeed, squids are essentially free-living muscles!  Squids take water into their body cavity and by contracting the muscle can quickly and forcibly expel it through the tubular siphon. A squid as the ability to control the direction of this siphon much like the jet engines on a Harrier Jet.  This same jetting can propel a squid out of the water (see above photo).The squid initiates aerial flights by forcefully ejecting water from the mantle.  This behavior underwater is seen as jet propulsion because the mantle can refill with water.  Above the water, however the mantle cannot refill with an aqueous propellant.   “So their launch into air is technically rocket propulsion.“ state O’Dor and coauthors.

In once case, the Orangeback Flying Squid, less than 2.4 inches in length, is able to fly under squid rocket power for 3.5 feet. This distance is nearly 18 times its body length.  This is equivalent of me launching my body more than the entire distance of a regulation basketball court.  But the flight doesn’t stop there.  These squids can continue to glide and soar like an eagle to the point of holding their arms to form a fin shape.  In flight they can reach speeds of 5.3 miles/hour, about the pace of leisurely run or jog.

O’Dor and colleagues suggest these flights are not by accident.  “WTF how did I get here?  OMG CAN’T BREATHE!”  From photographic evidence, the behavior, posture, and color of the squid change just before the launch.

So why do squids want to be rockets?

2. To take to the aerial escape from predators not so gifted with the power of flight.

3.  Because flight is easier than swimming!  The lower drag of a rocket squid in air versus water means that reduces the cost of transports by a 20%.  The costs could even be lower if squids are actively flapping their fins as well.  How do we test this?  “Getting squid to fly in a wind tunnel seems more problematic, but perhaps not impossible.” For Science!