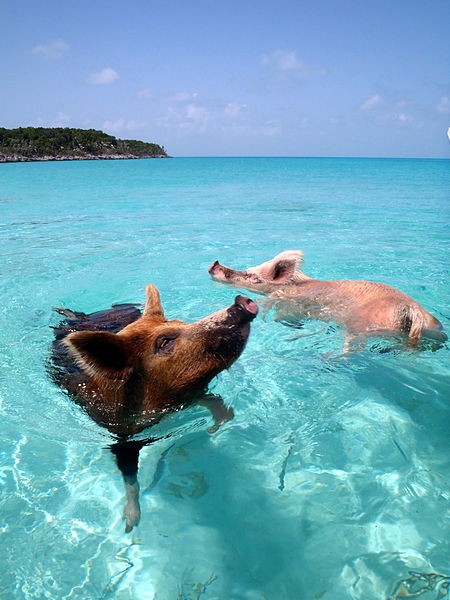 On a largely uninhabited island (a cay) in Bahamas, the chief residents are less than a two-dozen feral pigs. The island is now more lovingly referred to as Pig Island.  The origins of these island pigs are unknown.  One story suggests hungry sailors dropped them off to fatten them up for a later feast only to forget about them.  Another legends claims they are the only survivors of a shipwreck.  Or perhaps the island pigs were a business scheme to attract tourists to a nearby resort at Staniel Cay.

By day the pigs take to the water, swimming in the clear Bahamian seas in search for food.  However, do not get the wrong idea.  These swimming swine are not top ocean predators on the look out for a reef fish.  No they are looking for a handout from the tourists who are attracted to the island to see the paddling pigs.  Price for admission? Food scraps. The pigs will run into the water from the nearby trees and swim out to oncoming boats for great tourists and collect their food fee.

Indeed, the island itself is a perfect spot for the playful porcine.  A natural spring occurs on the island and string of neighboring islands largely protects it against storms. And with the islands lack of predators, theses pigs are nobody’s bathing bacon. 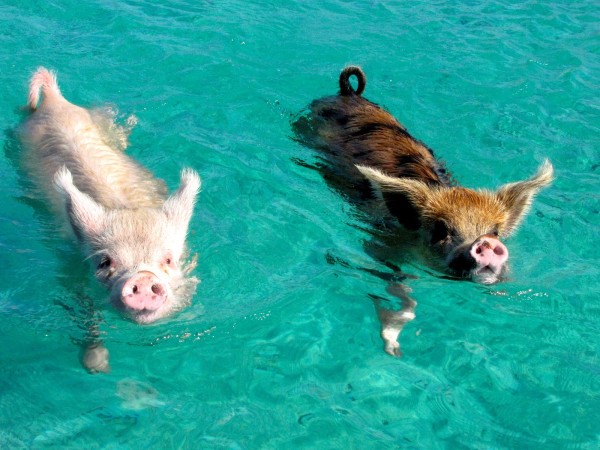 The swimming pigs are feral domesticated pigs, Sus scorfa domesticus, introduced to the islands about two decades ago.  From photographs, the swimming pigs appear smaller than typical pigs.  Larger mammals over evolutionary time on islands tend toward smaller sizes, i.e. miniaturization.   While small mammals tend toward larger sizes, i.e. gigantism.  Work I published earlier this year with collaborators on this island rule indicate that there is no single smoking gun that causes these bizarre evolutionary routes in body size.  The history of the species like where it came from, whether it’s a predator or herbivore, the climate of the island, and the presence of predators and competitors all likely impact the relationship.   Are these diminutive pigs experiencing my beloved island rule?  Or is simply tourism for skinny-dipping sows not a growth industry?

And if you can’t enough of these adorable bastards then here is a whole gallery.

5 Replies to “The Tiny Swimming Pigs of Pig Beach”