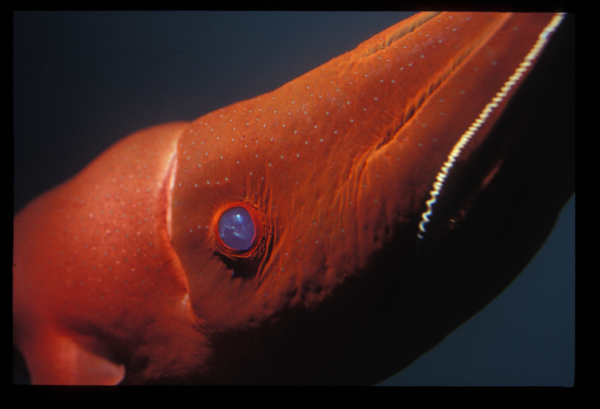 Vampire squid–with cloudy blue eyes, a blood red body, and barbed arms– may be the deep sea’s most frightening creature, but according to a new study, it may also be the gentlest. It turns out, this vampire is actually a vegetarian*. 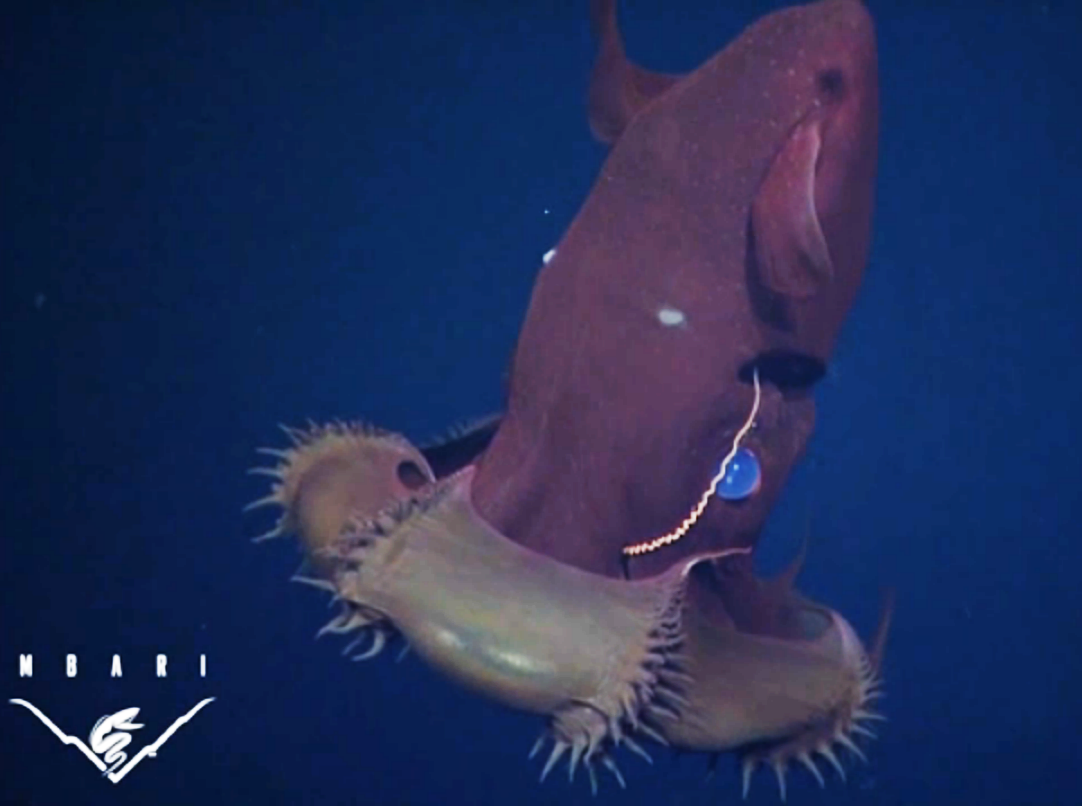 Vampire squid screencap from the video appearing at the end of this post. Note the long yellow filament that they use for feeding.

The decisive clue to the vampire’s kinder nature came in the form of long, stringy tentacles. For decades scientists puzzled over the mystery of these strange appendages. Are they for mating? Defense? No one knew, until scientists observed the squid doing something altogether surprising. It turns out, vampire squid use these tentacles like fishing lines, but they’re not catching living prey, they’re catching ‘snow’. Vampire squid scoop up sinking ocean gunk, known as marine snow, with their thin yellow tentacles, and then suck it off these appendages (like licking your fingers). This gunk includes bits of algae, dead animals, poo and bacteria from the ocean above.

And while the ‘vegetarian vampire’ story may be distressingly familiar–I can guarantee the vampire squid came up with it first. The lineage that includes the vampire squid has been around since the Jurassic (as in dinosaurs), and while it’s called a squid, its family tree is so old that it’s neither a squid, nor an octopus, but something altogether different. A unique creature living gently in its dark, cold, inhospitable home. Twilight may have made millions in media sales, but it’s got nothing on this real life gentle ocean vampire.

*Peeps on the webs have pointed out that my use of the term “vegetarian” is inconsistent with the fact that The Vamp will eat animal bits that are often part of marine snow. Truth. Scientifically, the vampire squid is called a “detritivore”. It eats detritus. Gunk. There is no equivalent word in the general vernacular for people that eat detritus. <insert favorite joke about rival sports team here>. Touché to those of you who took issue with the term, you’re right. And thank you for keeping me on my toes!

4 Replies to “This vampire’s surprising secret”