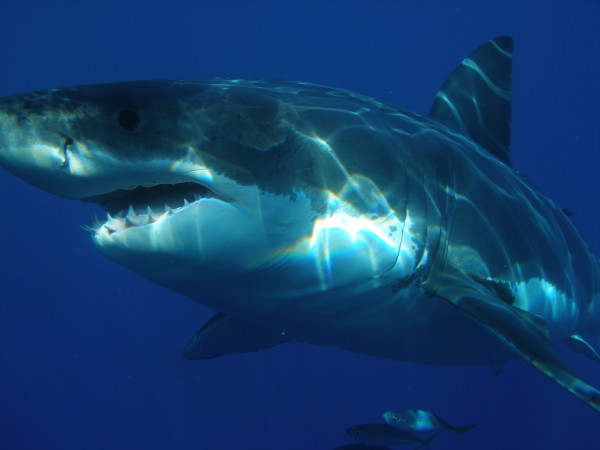 The drum lines should be effective in catching sharks and it’s my view if we’re catching sharks that are, or are about to be in close proximity to beaches, then by extension we’re making those beaches safer.

Let’s be crystal clear on terminology here. “Big sharks” is code for great white sharks–an IUCN Red Listed (vulnerable species)–that are over three meters (9.8 feet) in length and are the focus of a lot of attention following a string of recent fatalities by sharks in Western Australia. “Culling” is shorthand for the creation of designated zones just offshore popular beach recreation areas where these “big sharks” will be targeted and killed by fishers using baited drum lines. “Popular beaches” are coastal, sandy areas where humans increasingly congregate and enter an ocean ecosystem (that is inhabited by pinchy crabs, stingy jellyfish, and occasionally bitey sharks) for the purposes of recreation. Try as I might however, I can’t decipher Minister Buswell’s use of the word “effective” in describing  a culling strategy.  Perhaps that’s because despite his assertion, culling has zero evidence of actually reducing shark attacks.

My pal Chris Neff, a researcher at the University of Sydney who works at the interface of conservation biology and public policy, has dedicated a career to examining how governments react following attacks by sharks.  After analyzing the net effect of culls and hunts instituted after shark-related fatalities, Chris found that, “these responses are political, symbolically reducing public perceptions of risk rather than the actual risk.”  Chris believes that at the core of this reaction is the pressure on any government to respond after tragic and unexplainable events.  And if I’m an elected official keen to keep my constituents (and taxpayers) convinced that I’m “doing something,” it’s not too hard to follow a line of political reasoning that concludes after a rash of shark attacks that it’s high time to call in Captain Quint.

So, what might it look like if we based our public policy and reactions to shark related fatalities on evidence rather than spectacle?  If we dispense with the “eye for an eye” approach following shark attacks, what strategies are demonstrably more effective at reducing future shark-human interactions? To me, the solace you find in answering that question is predicated on two considerations: 1) the role that you feel government should play in safeguarding its citizens; and, 2) the limits you are prepared to accept for your own responsibility.  For instance, greater public education and awareness tactics (that could include uses of signs and flags to alert the public about marine hazards) are a start and have shown promise in a variety of applications around the world, from alerts to dangerous surf to the presence of stingers or warnings of a recent shark sighting. But at the end of the day, individuals ultimately need to assume  responsibility for their personal choices–and I say this without intent to minimize the tragedy of the loss of lives nor the grieving of families and friends affected by shark attacks in Western Australia.

I don’t know the particular circumstances involved in each incident, so cannot comment on what individuals did or did not do that may have increased their risk profile. But what each of them chose to do was enter a wilderness which, like it or not, has wildlife.

Look, you are statistically more likely to die by being hit by a bus whilst reading this post on your smart phone and absentmindedly stepping off the curb than you are to get chomped by a “big shark.”  But this doesn’t mean that the ocean should be your personal hazard-free zone.  The ocean is wilderness, no less than what you would expect in Alaska’s Denali National Park or Africa’s Serengeti.  When we enter these wilderness areas, we need to accept that there are risks from all the pinchy, stingy, and bitey life.

Accepting personal responsibility for the decisions we make doesn’t absolve our governments from the social compact of looking-out for us.  I still want crossing lights on streets, speed limits on roads, and all the other government-mandated standards and practices that keep my fellow humans from killing me throughout the day.  If I choose to disregard safety precautions to my detriment, then I either get through the experience by the skin of my teeth (and hopefully learn a lesson for next time), or I’m dead.  Either way, why should the government take the blame or feel the onus to act?  In this particular scenario, the Western Australian government concluded that sharks put humans in wilderness at risk.  Not the other way around: that people chose to accept a risk by entering wilderness (once again assuming that adequate warnings or alerts were available to them to make informed decisions).

Western Australia’s decision to position symbolism and perceived action ahead of leadership and evidence will be borne on the backs of an already vulnerable species.   Sadly, Australia could have truly served the world a powerful symbolic message if they instead concluded that culling was unthinkable at a time when every shark matters.

3 Replies to “Where The Wild Things Are”