Over 300 different species of anglerfish exist in the oceans.   The prominent lure gives them both their common name and the name of their scientific order, Lophiiformes.  Lophi, or lopho, in Latin means crest or a chicken’s comb.  The lure is the highly modified first dorsal spine of the fish.

Another unique characteristic of anglerfish is the parasitic dwarf males, long heralded in internet culture.  But only half of anglerfish species, those in the Ceratioidei sub-order, possess these unique males.  In these anglerfish species, females are 10x larger than males.  The males are essentially free living sperm packs.  Upon locating a female, anglerfish males will bite her side.  This biting triggers hormones that fuse his lips to her and dissolve his organs.  Eventually, he becomes nothing more than a testis on her side.

One anglerfish family, Centrophrynidae, contains only one species, Centrophryne spinulosa. Despite being found in the Atlantic, Pacific, and Indian oceans, the species is only known from 45 individuals.  Whether this rare species contains parasitic males is unknown.

Sofia Vieira and colleagues describe a joined female-male pair caught in 2010 off Savage Island near Portugal.  The female is the largest known of the species and attached to her belly, most likely recently given the fusion process looks incomplete, is a male.  The authors note that this pairing is extremely rare.  Of all known anglerfish specimens these parings are only known from ~5%.  This suggests pairings in the wild are extremely rare. 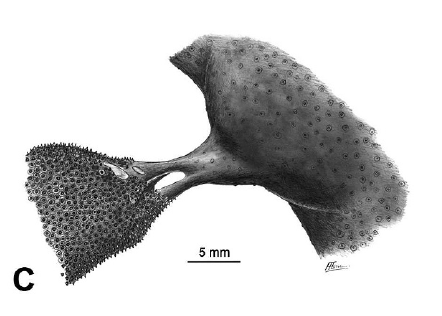