How will coral reefs respond to climate change?

Well, let’s start with an analogy. Suppose you pick an arbitrary time of day, choose a random subway station in any city, stand at the exit, and pull aside the first 100 people that emerge. You force them to run a marathon—right there, right then. There is no other option. You now have full control over those 100 lives. They’d better start running…or else. (Hey I didn’t say this was going to be an ethical analogy, did I?)

26.2 miles is a grueling distance, even for the most highly trained athlete. Nevermind what that distance might mean for the rotund businessman who faints at the mere sight of a treadmill (hostage #43 in your pack).

Climate change will be equally grueling for corals – human impacts will likely force reef-guiding species to endure oceanic conditions that they’ve never before faced during the history of their time on earth. As the global thermostat creeps ever higher, coral reefs will start singing that Nelly song.

But like our random pack of runners, not all corals start off on equal footing. Thermal stress (a.k.a. its gettin hot in herre) is a serious concern for reefs, since heightened temperatures are one of the main drivers of coral bleaching events. But some corals naturally live in hotter, more variable pools of water, and a new study suggests that these populations may be specifically adapted, at the genomic level, to deal with otherwise challenging temperatures (Barshis et al. 2013).

In other words, out of our 100 hostages, some people might say “&*%# YEAH!” and start running without a second thought (hey, you never know who’s been training for what race). Likewise, some corals have trained their genes to not FREAK OUT when the ambient water temperature is atypically high.

The researchers picked corals from highly variable (HV) and moderately variable (MV, a.k.a less variable) areas of the reef, brought the corals back to the lab, and then in controlled tanks barraged them with some pretty harsh environmental conditions. Barshis et al. (2013) then looked at what genes were expressed in the HV versus MV coral groups:

Under simulated bleaching stress, sensitive and resilient corals change expression of hundreds of genes, but the resilient corals had higher expression under control conditions across 60 of these genes. These “frontloaded” transcripts were less up-regulated in resilient corals during heat stress and included thermal tolerance genes such as heat shock proteins and antioxidant enzymes, as well as a broad array of genes involved in apoptosis regulation, tumor suppression, innate immune response, and cell adhesion. We propose that constitutive frontloading enables an individual to maintain physiological resilience during frequently encountered environmental stress, an idea that has strong parallels in model systems such as yeast. [Barshis et al. 2013]

In other words, some coral genomes appear to be pre-adapted to cope with the environmental stress that coral reefs could face under climate change. That’s not to say that “resilient” corals are immortal – this study only provides a small glimpse at genetic adaptation, and events like coral bleaching can be caused by many different factors. 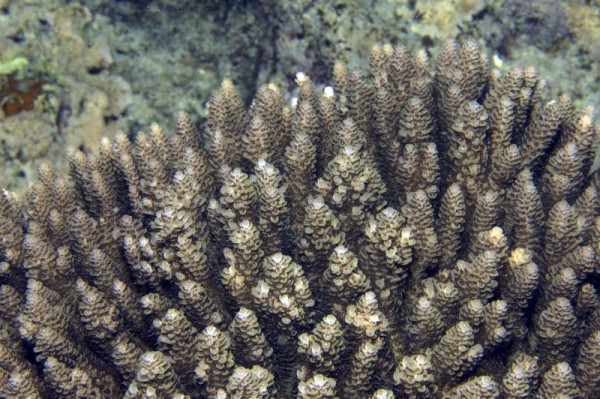 To add even more complexity, corals have these things called symbionts (Symbiodinium spp.) that live embedded in coral tissue and provide the corals with food. Because they harbor symbionts, corals aren’t just running a marathon – they’re running a marathon with a small child strapped to their back. A small child which can shout in your ear, complain about the bounciness of your running, and ask for a drink of water every half mile. The coral genome has to embark on a cellular response to temperature stress, while simultaneously turning on genes that tell its symbiont to STOP FREAKING OUT! Barshis et al. didn’t look at symbiont gene expression, but ponder whether particular symbiont genomes could contribute to “super corals” that are even more resilient than the populations measured in this study.

This study provides an exciting first glimpse at how corals might adapt to climate change at the cellular level. But alas, as always there are many questions still to be answered: How does the “frontloading” gene expression response happen in normal populations (e.g. not under controlled lab conditions), and how is it turned on over time in response to environmental variation? Given that some of the identified genes are involved in multiple cellular pathways, how do gene expression changes ultimately (and simultaneously) affect both coral health and stress tolerance? We don’t have the answers yet, but more coral genomics work is surely on the horizon!