As you all might know, my goal in life is to throw expensive s**t in the ocean. And I am very excited that in two months I will be once again going out to sea to do just that very thing, helping to throw several  oceanographic moorings into the Bering Sea. My exhilaration has been fueled by the scores of mooring deployment photos that line the halls of the building where I work and various other halls of oceanography that I frequent. But as I gazed longingly upon these photos of triumphant mariners deploying and recovering their colossal instruments of science, I started to notice that most of them looked familiar. The people and fashions might have changed, but the scenes…not so much.

It probably shouldn’t have been a surprise to me that scientists like to stick to a photographic formula. I even looked through my own photos and I could have interchanged them with some on the walls. No one would have probably noticed. I dare you, go into any oceanographic institution and you will find one of these photos. And of course, now that I have identified the the photographic preferences of physical oceanographers, I’m gonna share my favorite mooring memes.

Did anyone remember to pack a sandwich?

Worrying that your meteorological instruments might succumb to some terrible environmental death while deployed? Well worry no more, just deploy these hardy technicians to attend to your buoys every need for the next year! Bird pecking at your irradiance sensor? They’ll shoo it away. Seaweed stopping your anemometer from spinning? They’ll remove it. Seriously guys, I think NOAA’s deployed a pair every year since 1986.

THE THRILL OF THE KILL

I have surveyed this body of water and deemed it worthy of accepting my instruments.

Forget about posing with a mighty beast you have slain, we oceanographers proudly pose with our about to be deployed/recovered instruments. Hell, the ocean is a rough place and if we get our stuff back from the briny deep, it’s a proud, proud day.

WRANGLING OF THE GIANT BALL

ALL HANDS ON BALL.

You can pretty much describe most oceanographic moorings as a long string of instruments with an anchor at the bottom end and a giant foam ball of floatation at the top end to keep it upright. Since many deep sea moorings are easily over 2 miles long and have anchors that weigh 1000’s of pounds, the top float is deployed first to avoid having scary amounts of tension on the mooring cable. While these giant tropicana oranges may be buoyant in water, they are a bitch to handle on a boat in the high seas. Enter the ball wranglers, a pre-designated group of burly men who gently guide their precious cargo out and over the back of the ship into the water. And yes, I went there with this bad photoshop ode to ball wranglers everywhere. 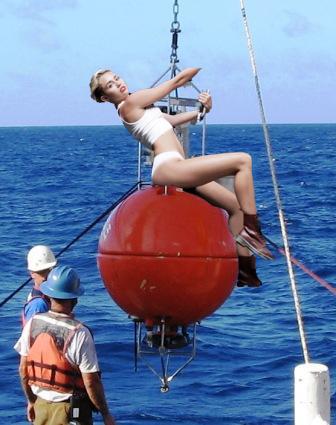 Bust out the power washer and wake up the graduate students.

I asked my friend, who has also deployed many a mooring, what she thought when she first saw this picture. Her response? UGH. And I had exactly the same thought. While the barnacle encrusted mooring may be the universal photographic metaphor for the durability of technology over the rigors of the sea, for many a graduate student it means a hell of a lot of dirty work with some icky sea life. You better bust out your Grundens overalls and a pair of Xtratuffs because there is no way that thing is going home a dirty rotting biological mess. At least you can now put “Master of the Power Washer” on your CV. 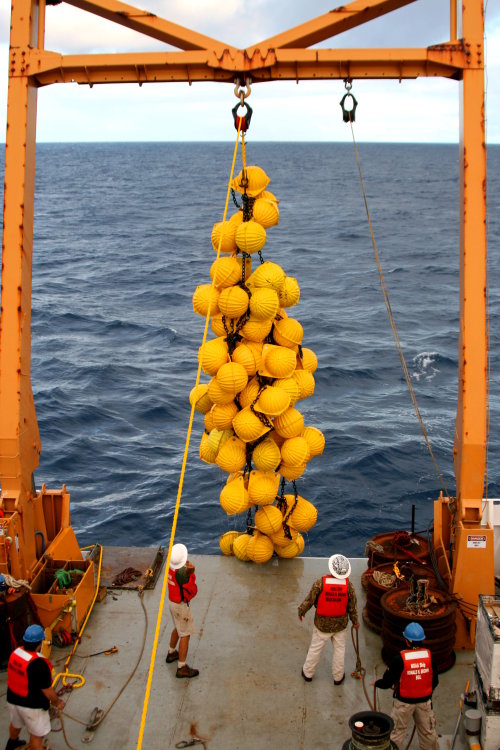 Alright, who forgot to pack the marlinspike?

Glass floats in hard hats. Carefully deployed in a long, orderly string over the stern of the boat. Spending days, months, years even, in a tidy yellow strand. Summon them to the surface, and it’s like you just double dared entropy to piss all over your science day. These things make knots so bad you start thinking fondly back to the third grade when you got your hair caught in that tiny handheld battery-operated fan. But you know why we love this photo, because it’s a reminder that science is a little twisted sometimes.

Got your own favorite oceanographic stock photos? Post ’em in the comments below. MOARing booring MOORings please!