When I first saw a sea sapphire I thought I was hallucinating. The day had been anything but normal, but this part will always stand out. I’d spent the afternoon on a small dingy off the coast of Durban, South Africa. It was muggy, and I’d been working for hours–-throwing a small net out, and pulling in tiny hauls of plankton that I’d then collect in jars. As I looked through one jar, the boat rocking up and down, I saw for an instant a bright blue flash. Gone. Then again in a different place. An incredible shade of blue. Maybe I’d been in the sun too long? Maybe I was seeing things? It wasn’t until I got back to the lab that I discovered the true beauty and mystery of these radiant flashes.

I’d like you to meet one of the most beautiful animals I’ve ever seen:

The small creature I’d found was a Sapphirina copepod, or as I like to call it, a sea sapphire. Copepods are the rice of the sea, tiny shrimp-like animals at the base of the ocean food chain. And like rice, they are generally not known for their charisma. Sea sapphires are an exception. Though they are often small, a few millimeters, they are stunningly beautiful. Like their namesake gem, different species of sea sapphire shine in different hues, from bright gold to deep blue. Africa isn’t the only place they can be found. I’ve since seen them off the coasts of Rhode Island and California. When they’re abundant near the water’s surface the sea shimmers like diamonds falling from the sky.  Japanese fisherman of old had a name for this kind of water, “tama-mizu”, jeweled water.

The reason for their shimmering beauty is both complex and mysterious, relating to their unique social behavior and strange crystalline skin. 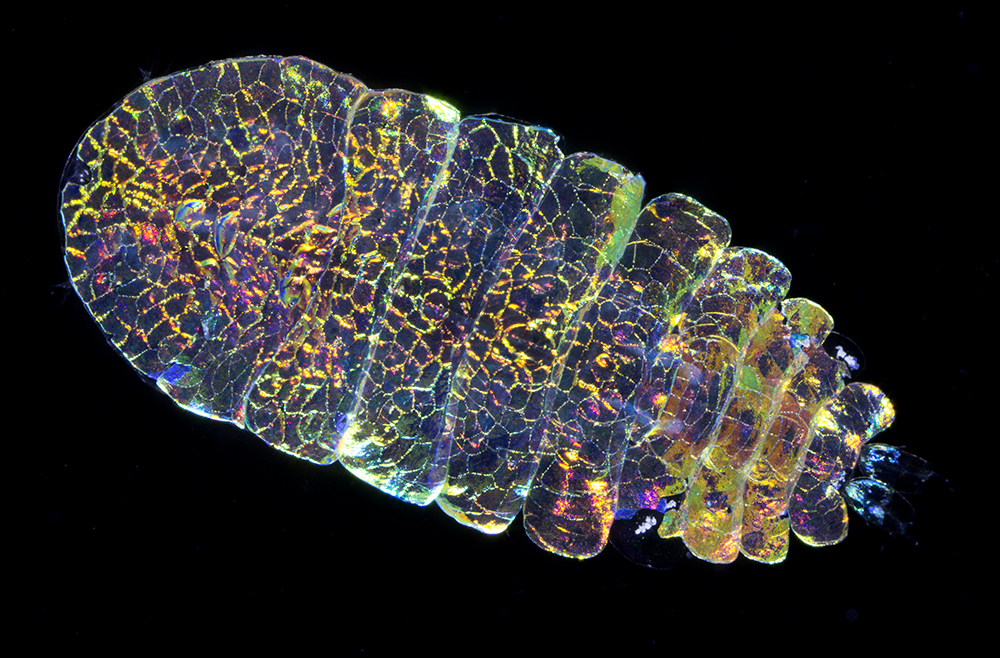 A key clue: this sparkle is only seen in males. Males live free in the water column, but females make their home in the crystal palaces of a strange, barrel-shaped jellies called salps. And though they’re not flashy, these parasitic princesses have huge eyes relative to males. Perhaps female sea sapphires look out upon an endless expanse of ocean sparkling with blue and gold, searching for the a particularly luminous shine. Or it could be that males use their shimmer to compete with one another, like jousting knights in shining armor, while the females watch on. About the social life of sea sapphires, we know very little. But how do they shine in the first place?

The secret to the sea sapphire’s shine is in microscopic layers of crystal plates inside their cells. In the case of blue sea sapphires, these crystal layers are separated by only about four ten thousandths of a millimeter; about the same distance as a wavelength of blue light. When blue light bounces off these crystal layers, it is perfectly preserved and reflected. But for other colors of light, these small differences in distance interfere, causing the colors to cancel out. So while white light is composed of all colors, only blue light is reflected back. This type of coloration is known as structural coloration, and though resembling a gem in hue, a sea sapphire’s color has more in common with an oil sheen than a pigmented jewel. Combine this nifty trick with the sea sapphire’s impressively transparent body, and you have an animal as radiant as a star in one moment, and invisible in the next.

I was lucky to find one, but sometimes they are found in astonishing numbers. My friend and colleague Erik Thuesen once told me about his work on an ROV, as the submersible was coming to the surface, “it passed through this amazingly sparkling layer of iridescent Sapphrina”.  A rare sight to see; not, perhaps, due to the rarity of these ocean gems, but the rarity at which we enter their world. Even as you read this, wherever you are and whatever you’re doing, they’re out there right now. Quietly shining in their own private universe of stars.

54 Replies to “The most beautiful animal you've never seen”