This is a sea glider. And an unusually filthy one at that… 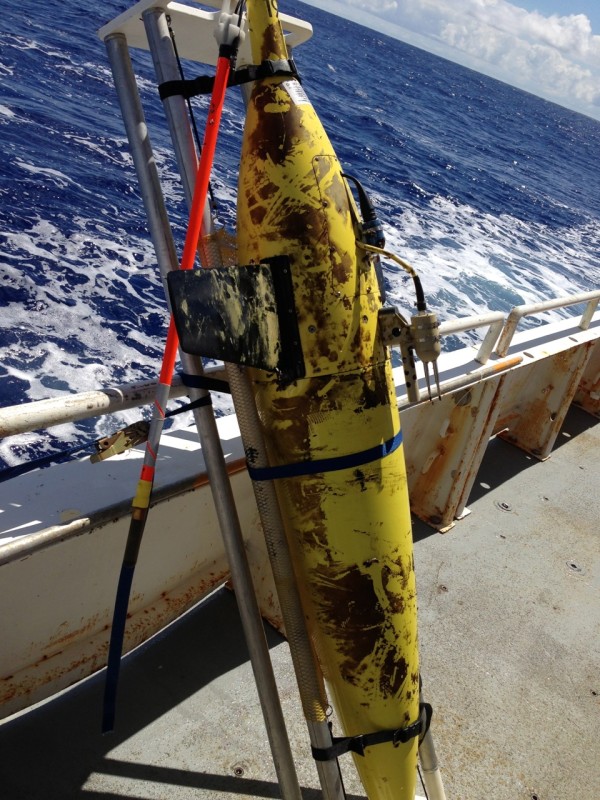 Someone hand me some soap PLEASE.

Seagliders spend their time flying up and down between the sea surface and the deep ocean again and again and again, all the while measuring the vital signs of the ocean (temperature, salinity and pressure). I imagine this is a lonely existence. Only when it comes to the surface does it briefly communicate with the outside world, sending out a strip of encoded data while receiving navigational instructions from pilots on land. The rest of the time they prowl the oceans, gathering data.

But I’m just going to go out on a limb here and say…YOU LIED TO US GLIDER! And those marks on your dirty, dirty hull tells us the truth, you had a clandestine encounter with a cephalopod!

You’ve been busted glider. Those sucker marks…probably the work of a squid. Gliders spend most of their time in the realm of these cephalopods, in the deep ocean beneath the photic zone. This particular encounter occurred in the Atlantic Ocean. There are multiple sets of sucker marks, and the ones in the back look like the squid attempted the full embrace maneuver, wrapping its arms completely around the glider (which is the standard way that squids investigate items of interest). 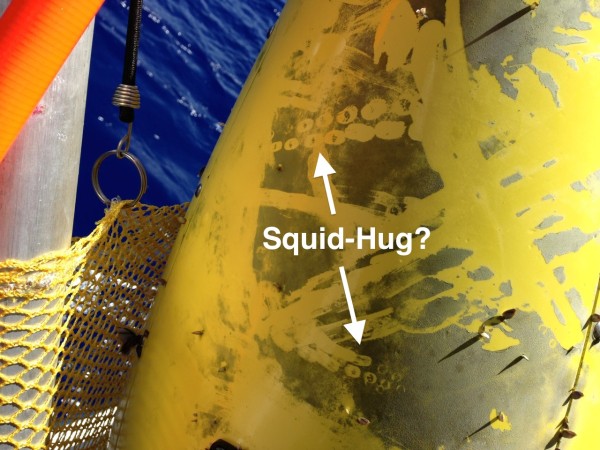 But what sort of embrace was it? Was it an epic wrestling match between squid and machine? Did the squid try to drag the glider down to the murky depths? Did they fight until the squid was tired to the gladius and the glider surfaced triumphantly?

Or was this much more than a war….perhaps it was love at first tentacle? I can see the trailer now “They were born worlds apart. One was a robot, the other a cephalopod. But they could not resist each other’s eerily similar mantles. Join Fabio as Squidmeo and as Lady Ga Ga as Gliderette and revisit the tale of these sea-crossed lovers…”  Maybe my squidmagination has swum a bit wild here.

Of the three gilders, all had barnacles attached to them but this is the only one that came back a brown mess. Some of the scientists on board suggested it could be squid ink, although no formal taste tests were conducted. The glider was part of SPURS, an experiment to measure the saltiest part of the ocean. But as suggested by Ben Jokinen, the glider technician, all that may have been sampled were the “salty, salty tears of the squid when we we took his yellow lover away from him.”

Thanks to Ben Jokinen and the IOP Lab at the University of Washington’s Applied Physics Laboratory for the pictures of the squid-handled glider.

Share the post "Was there an epic war or an epic romance between this robot and a squid?"

13 Replies to “Was there an epic war or an epic romance between this robot and a squid?”